English Monarchs and Music on the BBC

I wonder if we shall see David Starkey's BBC series on Music and Monarchy, on PBS which includes many examples of Renaissance polyphony, royal influence on musical composers, and the integration of music in the life and ceremony of royalty in England from the Middle Ages to the modern era. If not, a book, DVD, and CD are either available now or for pre-order and release later this year. There is also a youtube video of the first episode, beginning with Henry V and Henry VIII (interrupted by commercials). 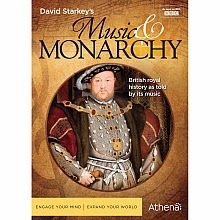 There's a sort of exuberant delight to Starkey's presentation – there he is pondering a performance just off centre-stage, or sometimes even standing right next to the conductor, or perhaps midway between the two ranks of choir stalls. He may as well stand in the best acoustic spot I suppose – but I guess the message is that Starkey is on a journey of discovery, and, through him, so are we. It's accessible history in the best tradition: rich in observation, a strong narrative told with conviction and colour, enthusing energetically throughout. The script takes fascinating facets of the story and elevates them with the sort of rhetoric which has made Starkey such a successful communicator of history. Thus, Henry V's French invasions were 'A Holy War to be fought with music'. Henry VIII 'was a master of the politics of splendour, and the brightest jewel and the most effective instrument was his Chapel Royal'. Episode one closes with Elizabeth I's court and the glories of her Chapel Royal: 'Outside it was the cold winter of Protestant austerity, inside it was indeed the warm summer of the Golden age of English Church music'.

But above all, we get to see some of the most important pieces of music of the past half-millennium performed in the places for which they were written, by the modern musicians who know them best, among them David Skinner, Fretwork, Richard Egarr and the Choirs of King's College Cambridge and Westminster Abbey. The lists of works featuring in the series runs onto four sides of A4.

Music, argues Starkey's series, was as integral to the image and power of monarchy as were armies and architecture. Nothing embodies the latter quite so well as Westminster Abbey itself of course, built as a shrine to a King-Saint, and later adorned at the east end with its glorious Lady Chapel in the most exquisite Perpendicular Gothic and itself a monument to Tudor prestige. Here, and throughout the Abbey's many chapels, the kings and queens now lie silent beneath austere tombs. The music, of course, lives on. Perhaps it's fitting that of all the memorials in the Abbey, it's one to a musician - Handel, sculpted by Louis-François Roubiliac - that is by far the most full of life.

The Spectator likes the book too, and highlights the influence of the English Reformation on English music, as Starkey notes that Henry VIII nearly destroyed the liturgical music he loved so much:

The Reformation targeted not merely the liturgy gracing the chapels themselves but the very performance style of their masses and motets. As early as 1516 Erasmus, in his Commentary on Corinthians 1.14, had criticised the vogue for increasingly complex polyphony, ‘a certain elaborate and theatrical music’ for which English clerics cherished a special fondness. ‘Those who are more doltish than really learned are not content unless they can use a distorted kind of music called descant.’ Thirty years later, with the walls whitewashed, shrines desecrated and idolatrous images torn down, Archbishop Cranmer, backed by Queen Catherine Parr, took up the cry. ‘In mine opinion,’ he told Henry VIII, ‘the song that shall be made would not be full of notes, but as near as may be, for every syllable a note, so that it may be sung distinctly and devoutly.’

Starkey and Greening neatly demonstrate how much of what we treasure in Tudor church music is due to skilful religious fudging and compromise by Catholic court musicians, as also to the unfathomable quirks and ambiguities of Elizabeth I’s spiritual outlook and artistic tastes. Sovereigns in her time were noted, not always sycophantically, as accomplished performers, vocal or instrumental. Elizabeth may not have been quite such a versatile keyboard player as her flatterers claimed, but King Charles I handled a bass viol with professional skill and honoured his lutenists and singers with the ultimate royal accolade of leaning a hand on their shoulders as they played. Music & Monarchy captures the tragic irony underlying Charles’s execution outside the very same Inigo Jones Banqueting House once resonating with the lyrics and dances of those extravagant masques which, during the 1630s, had sustained the increasing illusion of his kingship.

The book and the DVD are definitely on my wish list!
Posted by Stephanie A. Mann at 12:30 AM