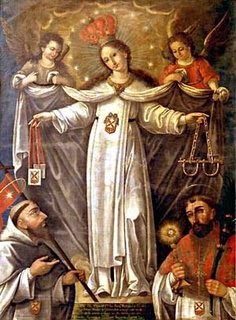 Until the year 2000 when the Vatican approved the new calendar for the Dioceses of England and Wales, today was the Feast of Our Lady of Ransom. A guild was founded in 1887 with "three special intentions:

~~the conversion of England and Wales in general, and of individuals in particular;
~~the rescue of apostates and those in danger of apostasy;
~~the forgotten dead, who, owing to the Reformation, or to being isolated converts, or other causes, are without special Masses and prayers."

The origins of the feast and its connection to St. Raymond of Penyafort and the Mercedarian Order:

The Blessed Virgin appeared in 1218 in separate visions to St. Peter Nolasco, St. Raymond of Penafort and James, king of Aragon, asking them to found a religious order dedicated to freeing Christian captives from the barbarous Saracens or Moors, who at the time held a great part of Spain. On August 10, 1218, King James established the royal, military and religious Order of our Lady of Ransom (first known as the Order of St. Eulalia, now known as the Mercedarian Order), with the members granted the privilege of wearing his own arms on their breast. Most of the members were knights, and while the clerics recited the divine office in the commanderies, they guarded the coasts and delivered prisoners. This pious work spread everywhere and produced heroes of charity who collected alms for the ransom of Christians, and often gave themselves up in exchange for Christian prisoners. This feast, kept only by the Order, was extended to the whole Church by Innocent XII in the 17th century.

More here from the same site. You might note the scapular Our Lady is holding in her right hand, as her left hand holds the chains and manacles of captivity. More about the scapular here. With the increased violence against Christians in the Middle East and in Africe, revival of this devotion seems appropriate!

O God, through the glorious Mother of Your Son You enriched the Church with a new religious congregation dedicated to freeing Christians from slavery among the heathens. We venerate Mary as the foundress of this institution and pray that she may also deliver us from our sins and the slavery of the devil through her own merits and intercession. Through the same Jesus Christ, our Lord . . . Amen.

Since the year 2000, September 24 is the Feast of Our Lady of Walsingham in England, and in 2011 the shrine(s) celebrated the 950th anniversary of the founding of "England's Nazareth". Today in Walsingham there are two shrines--one Catholic, one Anglican. Thomas Cromwell, Henry VIII's vice regent in these spiritual matters, had the first (Catholic) shrine destroyed along with other shrines to the Mother of God throughout England. The statues were brought to the Chelsea area of the London and destroyed in a bonfire. Walsingham calls itself "England's Nazareth" and promotes both the Catholic and the Anglican shrines on its tourism website.

In 1893, Pope Leo XIII promised: "When England returns to Walsingham, Our Lady will return to England." Even after Pope Leo restored the shrine of Our Lady of Walsingham in 1897, it took some time for [Catholic] England to return to Walsingham. In 1922, the Anglo-Catholic Father Hope Patton established the Anglican shrine of Our Lady of Walsingham. In 1934, the Archbishop of Westminster, Cardinal Bourne, led a major pilgrimage to the Catholic Walsingham and it became the National Marian Shrine.

With Pope Emeritus Benedict XVI's foundation of the first Personal Ordinariate for groups of former Anglicans on January 15, 2011, named for Our Lady of Walsingham, Our Lady's return to England was even more firmly established.

O alone of all women, Mother and Virgin, Mother most happy, Virgin most pure, now we sinful as we are, come to see thee who are all pure, we salute thee, we honour thee as how we may with our humble offerings; may thy Son grant us, that imitating thy most holy manners, we also, by the grace of the Holy Ghost may deserve spiritually to conceive the Lord Jesus in our inmost soul, and once conceived never to lose him. Amen.

All Holy and ever-living God, in giving us Jesus Christ to be our Saviour and Brother, You gave us Mary, His Mother, to be our Mother also; grant us, we pray you, to live lives worthy of so great a Brother and so dear a Mother, that we may come at last to you the Father of us all, Who lives and reigns for ever. Amen.

Our Lady of Walsingham, Pray for us.
Posted by Stephanie A. Mann at 12:30 AM