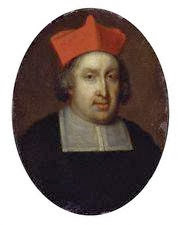 According to the Catholic Encylopedia, Philip Cardinal Howard was a:

Dominican and cardinal, commonly called the "Cardinal of Norfolk"; born at Arundel House, London, 21 September, 1629; died at Rome, 17 June, 1694. He was the third son of Henry Frederick Howard, afterwards Earl of Arundel and Surrey and head of the House of Norfolk (the dukedom of Norfolk being forfeited, though restored in 1660). The mother of Philip was Elizabeth, daughter of the Duke of Lennox; he was thus allied to the reigning sovereign of England. At the age of sixteen he joined the Dominican Order in Italy, was professed at Rome, 1646, and took the name of Thomas in religion. Residing at Naples for his studies, he was chosen to deliver a Latin address to the general chapter of his order in Rome. He justified the choice delivering a fervent address on the conversion of England, which led to a decree being passed by the chapter, urging provincials and priors to do all they could to receive English, Irish, and Scotch novices into the order, with a view to its preservation in those countries. He was thenceforth wholly devoted to the conversion of England and to the progress of his order in that country. He was ordained priest in 1652, and with the sanction of his superiors set himself to carry out the ideas he had matured in his mind. He founded the priory of Bornhem in Flanders, with a college for English youths attached to it, and was himself the first prior and novice master. He also founded at Vilvorde a convent of nuns of the Second Order of St. Dominic, now at Carisbrooke.

In the reign of Charles II Father Howard was made grand almoner to Queen Catherine of Braganza. He resided at St. James's Palace, with a salary of 500 pounds a year, and had a position of influence at Court. An outbreak of Puritan violence compelling him to leave England, he resumed his position as prior at Bornhem. He was made cardinal in 1675, by Pope Clement X, being assigned the title of S. Cecilia trans Tiberim, exchanged later for the Dominican church of S. Maria supra Minervam. He now took up his residence at Rome and entered into the service of the Universal Church, especially watching over the interests of the Catholic faith in England.

In 1672 he was nominated by the Holy See as Vicar Apostolic of England with a see in partibus, but the appointment, owing to the opposition of the "English Chapter" to his being a vicar Apostolic, and the insistence that he should be a bishop with ordinary jurisdiction, was not confirmed. He was to have been Bishop of Helenopolis. In 1679 he was made Protector of England and Scotland. At his instance the Feast of St. Edward the Confessor was extended to the whole Church. He rebuilt the English College in Rome, and revised the rules of Douai College.

Cardinal Howard cooperated later with James II in the increase of vicars Apostolic in England from one to four, an arrangement which lasted till 1840, when the number was increased to eight by Gregory XVI. Burnet shows in his "History" that Cardinal Howard regretted the steps which led to the crisis in the reign of James II and which his counsels sought to avert. The cardinal's plans were thwarted and the ill-starred mission of the Earl of Castlemaine to Rome showed the rise of another spirit which he did not share. When the crisis he foresaw came, he had the consolation at least of knowing that his foundation at Bornhem was beyond the grasp of the new persecutors.

Cardinal Howard assisted at three conclaves, for the election of Innocent XI in 1676, Alexander VIII in 1689, and Innocent XII in 1691. He died in the twentieth year of his cardinalate, at the age of 64, and was buried in his titular church of S. Maria supra Minervam at Rome.His foundations in Flanders flourished till the French Revolution, when they were despoiled to a great extent, and were eventually transferred to England. The English Dominican Province looks to him as its father and restorer, and the American Province also regards him to a great extent in the same light. After his death the Master General, Father Antoninus Cloche, addressed a letter to the whole order, lamenting the loss of one who had done so great a work for the English Church and the order.


As the website for the Dominican order in England notes, his efforts were crucial to re-establish community life for those English men and women following their call to vocation in the religious life. Cardinal Howard was the third son of Henry Howard, the 22nd Earl of Arundel, son of Thomas Howard, the 21st Earl of Arundell and the son of St. Philip Howard, the 20th Earl of Arundel. His eldest brother, Thomas Howard, although he did succeed as the 5th Duke of Norfolk, was mentally deficient, and the middle brother, Henry Howard, fulfilled the elder's duties at Earl Marshall, succeeding him as the 6th Duke of Norfolk in 1677. It's sad to note that Henry Howard voted in the House of Lords for the conviction of his uncle William Howard, the 1st Viscount Stafford (along with almost all of the other Howards) in the charge of treason brought upon him by the Popish Plot--especially when Henry Howard had been forced into exile by the Test Acts and been charged with recusancy himself. Only his son, also named Henry, voted for the Viscount's innocence.
Posted by Stephanie A. Mann at 12:30 AM