Birth of the Blessed Virgin Mary 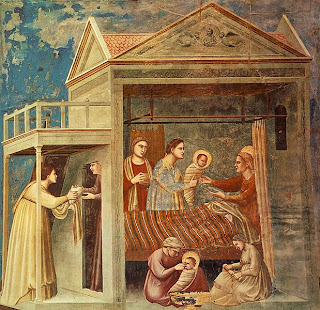 On the 1962 Missal liturgical calendar, today we celebrate the Feast of the Nativity of the Blessed Virgin Mary along with the Sixteenth Sunday after Pentecost. As this article from EWTN's library notes:

The origin of this Feast is sought in Palestine. It goes back to the consecration of a church in Jerusalem, which tradition identifies as that of the present basilica of St. Ann.

At Rome the Feast began to be kept toward the end of the 7th century, brought there by Eastern monks. Gradually and in varied ways it spread to the other parts of the West in the centuries that followed. From the 13th century on, the celebration assumed notable importance, becoming a Solemnity with a major Octave and preceded by a Vigil calling for a fast. The Octave was reduced to a simple one during the reform of St. Pius X and was abolished altogether under the reform of Pius XII in 1955.

The present Calendar characterizes the Birth of Mary as a "Feast," placing it on the same plane as the Visitation.

For some centuries now, the Birth has been assigned to September 8 both in the East and in the West, but in ancient times it was celebrated on different dates from place to place. However, when the Feast of the Immaculate Conception (which has a later origin than that of the Birth) was extended to the whole Church, the Birth little by little became assigned everywhere to September 8: nine months after the Solemnity of the Immaculate Conception.

A poem on the Nativity of the Blessed Virgin Mary by St. Robert Southwell:

Joye in the risinge of our orient starr,
That shall bringe forth the Sunne that lent her light;
Joy in the peace that shall conclude our warr,
And soone rebate the edge of Satan's spight;
Load-starr of all engolfd in worldly waves,
The card and compasse that from shipwracke saves.

The patriark and prophettes were the floures
Which Tyme by course of ages did distill,
And culld into this little cloude the shoures
Whose gracious droppes the world with joy shall fill;
Whose moysture suppleth every soule with grace,
And bringeth life to Adam's dyinge race.

For God, on Earth, she is the royall throne,
The chosen cloth to make His mortall weede;
The quarry to cutt out our Corner-stone,
Soyle full of fruite, yet free from mortall seede;
For heavenly floure she is the Jesse rodd
The childe of man, the parent of God. 
One of our earliest English critics, Ben Jonson, famously wished that he had written Southwell's 'Burning Babe', the most famous poem of the body of spiritual verse written by the Elizabethan priest, poet and martyr S. Robert Southwell SJ (1561-95). This book is a complete, authentic edition of Southwell's poems, in English and Latin, offering new texts based on the very manuscripts which were circulated in secret among English Catholics in the years following the poet's death. By re-examining these contemporary manuscripts, this edition allows Southwell's poems to regain some of their original purpose of communicating forbidden theologies and doctrines amongst a criminalised and near-silenced readership of secret groups. These are the poems of those Catholics who did not or could not flee the country as the Elizabethan State bore down upon their faith in the last two decades of the sixteenth century.


Audacious and beautiful in themselves, Southwell's poems were also immensely influential in the the development of early modern English literature; his new visions and visualisations bear their fruit a generation later in the works of Donne and Herbert. Southwell's rare Latin verses, available here for the first time, accompanied by a new translation, demonstrate the significant creative debt owed to him by the Augustans, even by Milton.

Here is a review of the collection.

Just a note that the celebration of Queen Elizabeth I's birthday on September 7 always upstaged this feast during the queen's reign, although the Church of England does include the Birth of the Virgin Mary on its liturgical calendar today.
Posted by Stephanie A. Mann at 12:30 AM