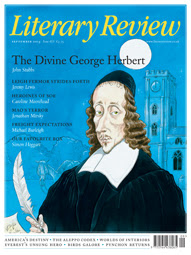 Quite unlike Donne's life of adventure, disgrace, regretful isolation and self-fashioned redemption, Herbert's followed a steady trajectory of study, duty and meditation. His main dilemma seems to have been whether to pursue a public career - as his talents, social connections and perhaps family pressures disposed him to - or to take the cloth. There was, of course, no direct contradiction between the two: a bishop in the 1620s could still become a high-ranking minister. Yet Herbert seemed aware that the priesthood would take him in another direction towards simplicity and comparative solitude. He followed the example set by men such as Lancelot Andrewes, the famed preacher and one-time dean of Westminister, who would spend the entire morning alone in prayer when his duties allowed: events were always counterpointed by steady and, by any standard, gruelling rituals of prayer, reading, repeating and mastering declensions. Not a life for everyone; yet it helped quieten rather than stifle the heart.

I struck the board, and cried, No more.
I will abroad.
What? Shall I ever sigh and pine?
My life and lines are free; free as the road,
Loose as the wind, as large as store.

Herbert as much as Donne voices the waywardness of the passions, the anger that can send a child charging like an escaping balloon. But Herbert looks for a solution where Donne insists there is only a puzzle. For Donne, knowledge lies in dilemma, in paradox; for Herbert, this is only a stage. Their poetic language is also entirely different. In his famous 'Song: Go, and catch a falling star', for example, in telling his listener to 'Ride ... Till age snow white hairs on thee', Donne uses a metaphor from Horace, which an ancient book on rhetoric, Quintilian's Institutio Oratoria, explicitly disapproved of as 'far-fetched'. He even goes a step or three further. Snow is a metaphor for the visible effects of old age (white hair) and indeed age itself, but it is hard or even silly to visualise 'white hairs' literally snowing down onto someone's head. We have to go beyond that idea, by degrees, to the one Donne intends.

There is no such bad behaviour in Herbert. Because of this and other differences, the two poets have their camps of rival supporters; Drury avowedly belongs to Herbert's. In life, Donne and Herbert took mutual benefit from their diverse casts of mind. Although Donne was twenty years senior, he didn't treat Herbert as the younger man. They spent the summer of plague in 1625 together at the home of Herbert's stepfather in Chelsea and became respectful friends. By then Donne was the dean of St Paul's and was finding new self-definition in a venue that demanded preaching 'loose as the wind, as large as store' to fill its vast Gothic chamber. Herbert's path, on the other hand, lay towards minimalism, the quietness of retreat. He worked in small parishes, doing much to restore to his church at Leighton Bromswold and supporting the religious community at Little Gidding, the group in Huntingdonshire invoked in the fourth of T S Eliot's Four Quartets. Eliot, in many ways torn between the vision of Donne and the brighter influence of Herbert, illustrates the futility of asking which poet might be greater: we need both.

John Drury's excellent book is a fine guide and companion to such questions, bringing Herbert's 'life and lines' along the road without ever forcing a step. His attitude to Herbert the poet is one of inexhaustible wonder and inquiry, while to the man who died at 39 he is almost father-like, tender and humane. Music at Midnight should not cause readers or students to neglect Amy Charles's Life of George Herbert (1977), but no one interested in this writer should be without it.

Note that John Stubbs is the author of a biography of John Donne: Donne: The Reformed Soul (2006). ﻿
Posted by Stephanie A. Mann at 12:30 AM