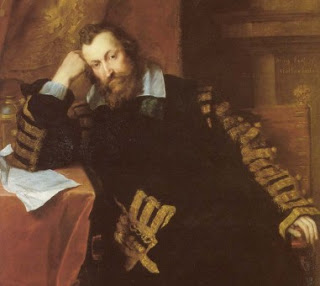 Henry Percy, the 9th Earl of Northumberland AKA "The Wizard Earl" was born on April 27, 1564. His father was also named Henry Percy, but he was the 8th Earl of Northumberland, receiving that title when his brother, the Wizard Earl's uncle, Thomas Percy, 7th Earl of Northumbland was executed in 1572 for his leadership of the Northern Rebellion--and Thomas Percy was beatified by Pope Leo XIII as a martyr! The Wizard Earl's father died in the Tower of London, imprisoned there under suspicion of treason. His grandfather had also run afoul of the Tudor monarch of his era, as Sir Thomas Percy was executed by Henry VIII in 1537 for his involvement in the Pilgrimage of Grace (I'm not sure why he hasn't been beatified as a martyr if his son has been). I think we can see a pattern of trouble in this family's relationship to the Tudors--and it held true for the Wizard Earl during the reign of James I of England.

Henry Percy, the 9th or ‘Wizard’ Earl of Northumberland led an extraordinary life of a true Renaissance nobleman, despite his deafness and 15 years as a prisoner. He was a great scholar, became the patron of the English astronomer Thomas Harriot, the first man to map the surface of the moon before Galileo and earned his nickname ‘Wizard’ by experimenting in alchemy. He was a friend of Sir Walter Raleigh and their interest in the New World led them to consume great quantities of tobacco and potatoes. But it was on 4 November 1605, that the Earl’s fortunes declined literally overnight! A distant cousin, Thomas Percy, who was a staunch Roman Catholic, dined with the Earl at Syon before joining Guy Fawkes and his accomplices the next day, in the attempt to blow up the Houses of Parliament. As one of the principal ‘gunpowder plotters’, Thomas was shot trying to make his escape. Although innocent of the charges brought against him, the Earl was implicated through his association with Thomas and the fateful meeting at Syon. He was confined in the Tower of London for the next 15 years on the orders of King James I.


The 9th Earl was known as the Wizard Earl because of his great interest in science--even in alchemy--and his development of a great library. He was eventually released from the Tower and he died on November 5, 1632. Believe it--or not!
Alexander Rose's Kings in the North: The House of Percy in British History tells the story of this family and one reviewer summarized the generations of trouble and adventure they exemplify:
Over the past eight centuries, two earls and one duke have been killed in battle, most recently in 1940; one has been lynched by a mob; one beheaded for treason, one shot by government assassins, five incarcerated in the Tower for more or less prolonged periods, and one beatified by the Church of Rome. It is a striking record of public service or disservice, depending on your point of view. The Percys are still the owners of Alnwick Castle and Syon House, and are among the largest landowners in Britain. . . .
As soon as the Scottish menace faded in the 16th century, the Percys lost their power. The Tudors no longer needed a viceroy in the north. The sixth earl was ruined by Henry VIII, the seventh executed by Elizabeth, the eighth murdered in the Tower and the ninth abandoned politics for chemistry and astronomy. His successors abandoned the north altogether, and went to live on their Sussex and London estates. The modern fortunes of the family are due to Sir Hugh Smithson, who married the last Percy heiress in the 18th century, adopted her name, and re-established the family as a great northern dynasty.
Posted by Stephanie A. Mann at 12:30 AM