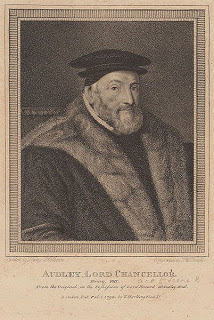 Thomas Audley, lst Baron Audley of Warren died on April 30, 1544--he managed to die safely in his bed with his head intact by serving Henry VIII very well. A lawyer by training, Audley served Cardinal Wolsey and served in Parliament, representing Essex and he continued to rise in office throughout Henry VIII's reign.

Audley participated in the trials and executions of not only Thomas More and John Fisher, but also of Anne Boleyn and Thomas Cromwell, and he sentenced the rebels of the Pilgrimage of Grace to death. For these and other services (the annulment of Henry VIII's marriage to Anne of Cleves, for instance), he was not only knighted but became a member of the Order of the Garter. Audley was Lord Keeper of the Great Seal from 1532, when he succeeded Thomas More, to 1544, when he resigned it on April 21. He also succeeded Thomas More as Speaker of the House of Commons in 1529 and as Lord Chancellor in 1533. According to this parliamentary history website, there has been some controversy about his activity at these trials and about his religious positions:

If his knightly status exempted Audley from the trial of Anne Boleyn in 1536 (it was not he but John, 8th Lord Audley, who took part in this), he was involved in all the other state trials of these years. His conduct in these trials, and especially in More’s, has been much criticized but it deserves to be judged in the light of Audley’s own beliefs concerning the rights of the sovereign and the duties of the subject. No such criticism, despite occasional and clearly prejudiced charges of favouritism and corruption, can be levelled against his conduct as an equity judge, and even in cases of treason his attitude is illustrated by his advice in 1536 that the Duke of Suffolk should be armed against the Lincolnshire rebels with a commission to try cases of treason, showing that he took for granted, even in such circumstances, the necessity of a trial at common law.

Audley’s religious position is difficult to assess. A correspondent of Melanchthon named him with Cromwell and Cranmer as friends to Protestantism but, if he was, the friendship was always qualified by his allegiance to the King whose policies he faithfully carried out, a course which in general gives an impression of conservatism. Thus an anonymous enthusiast for the Act of Six Articles (31 Hen. VIII, c.14) again linked Audley with Cromwell as two men who, this time in contrast to Cranmer and to other bishops, had been ‘as good as we can desire’ in the furtherance of the measure. Audley was equally content to follow Cromwell’s lead and what few clashes there were between them arose largely out of minor questions of patronage.

Audley also benefitted from the Dissolution of the Monasteries, receiving grants of Holy Trinity Priory in Aldgate, London (which had been founded by Queen Matilda or Maud, Henry I's wife) and Walden Abbey, where his grandson, Thomas Howard, 1st Earl of Suffolk built Audley End, which is now part of the English Heritage program. He founded Magdalene College at the University of Cambridge in 1542, after the Benedictine's Buckingham College was closed.

Audley's title as lst Baron Audley of Warren died with him. One of his daughters, Margaret, married Thomas Howard, the 4th Duke of Norfolk (who was executed by Elizabeth I).
Posted by Stephanie A. Mann at 12:30 AM