Margaret Thatcher, one of the greatest leaders of the Cold War, of the 20th century, and of British history, has died at the age of 87.


I’ve referred to her as one of my Cold War seven: Ronald Reagan, John Paul II, Mikhail Gorbachev, Lech Walesa, Vaclav Havel, Boris Yeltsin, and Margaret Thatcher. They were the seven figures who dissolved an Evil Empire, and only Walesa and Gorbachev still remain with us.
The world dubbed her the Iron Lady, a title that duly fits. Many, however, mistake the Iron Lady moniker as referring solely to her strength in the Cold War. There was much more to it. Consider:

Margaret Thatcher is arguably the most complete British leader of the last 100 years, surpassing even Winston Churchill. Like Churchill, she was tough and successful in foreign policy, taking on and vanquishing totalitarian evil. Churchill warned the world as the Iron Curtain descended across Europe. Decades later, the world celebrated as the Iron Lady helped break the Iron Curtain.

But unlike Churchill, Margaret Thatcher had enormous domestic successes that Churchill couldn’t touch, and didn’t dare try to touch. When World War II closed, the British people booted Churchill from the prime ministership in preference of Labour leader Clement Attlee, who gave the British populace Keynesian socialism. The masses wanted their welfare state, and Attlee, equipped with promises of “change” and “forward,” gave them a fundamental transformation. In no time, Attlee’s party was spending money unlike anything Britain had ever seen, nationalizing everything under the sun, including with the progressive left’s coup de grace: government healthcare. It was a giant government binge that would bury Britain for decades. 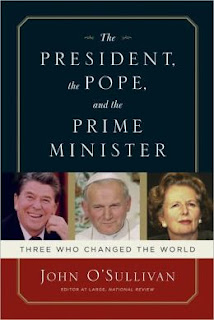 John O'Sullivan titled his 2006 book about the triumvirate of Reagan, Thatcher and Pope John Paul II, The President, the Pope, and the Prime Minister: Three Who Changed the World. The American Spectator has this 2007 review in its archives:

OTHER WRITERS HAVE NOTED the timely emergence of an American president, a Polish pope, and a British prime minister in the late 1970s and early 1980s and their critical role in leading the West to a peaceful resolution of the Cold War. But it has remained for the Anglo-American journalist and editor John O’Sullivan to write the definitive history of how Ronald Reagan, Pope John Paul II, and Margaret Thatcher worked together, openly and not so openly, to bring about what most experts agreed was impossible — the swift dissolution of the Soviet Union and Marxism-Leninism.

To write such a multi-faceted story, you would want a polymath: an American familiar with Reagan’s special genius for combining principle and pragmatism, a Brit who could explain how Thatcher became the first woman prime minister in British history, and a Roman Catholic who understood why the Soviets were so worried about the impact of a Polish pope on their empire. You would seek someone with a keen historical sense and a flair for biography — and the ability to integrate smoothly the myriad accomplishments of three major figures of our times. If this paragon also had a smooth, accessible writing style, that would be a heaven-sent bonus. It would be impossible, of course, to find someone who could do all of the above-unless you could persuade John O’Sullivan to write The President, the Pope, and the Prime Minister, his first but not I hope last book.

O’Sullivan begins his admirable study by making the arresting point that the times seemed to have by-passed Reagan, Thatcher, and Karol Wojtyla, who embodied such seemingly “fading” virtues as faith, self-reliance, and patriotism. But the unexpected death of the Italian John Paul I led to the election of the Polish John Paul II in 1978; Jimmy Carter’s monumental ineptitude at home and abroad prepared the way for a conservative alternative in Reagan in 1980; and Britain’s accelerating economic decline coupled with a series of often violent strikes in the winter of 1978-79 brought the country to the edge of anarchy. Thatcher offered a strong purgative — economic liberty, traditional Christian values, patriotism, and a strong attachment to the United States and like-minded nations — and in May 1979 was elected prime minister. . .

In summing up the individual and collective achievements of the president, the pope, and the prime minister, O’Sullivan states that Reagan won the Cold War without firing a shot; revived the U.S. economy, which went on to enjoy more than 20 years of consecutive economic growth; restored the spirit of America; and established a “new conservative dominance in American politics” based on small government and low taxes.

John Paul II, besides helping bring down the Soviet empire, bequeathed to Pope Benedict XVI a Catholic Church that was large, growing fast (particularly in the Third World), and becoming more orthodox. According to O’Sullivan, Thatcher’s reputation is higher in the rest of the world than in Britain, but even in her native land the Iron Lady’s policies that defeated inflation, restored British industry, and helped win the Cold War are “almost universally regarded as correct.” Still she bears the burden of the vehement opposition and even hatred they aroused, especially among the liberal intelligentsia.

I heard an interview with O'Sullivan on the Son Rise Morning Show yesterday, and he emphasized that President Reagan was the link between Pope John Paul II and Prime Minister Thatcher: she did not deal as directly, or as often with the Pope as Reagan did. He also commented that Lady Thatcher was an Anglican much influenced by Methodism, in which she was raised. In 1978, Lady Thatcher talked to the editor of The Catholic Herald about her religious practice:

“Methodism isn’t just a religion for Sundays – no faith is only a faith for Sundays. There were a lot of things during the week which one attended. Methodism is a pretty practical faith; there were the mothers’ sewing meetings and the guilds for young people.

“It’s also evangelical, and does a lot of missionary work overseas. The visiting missionaries, some of them from South America, some from Africa and India, would come back and tell you of the kind of work they were doing.

“I must say I was very much attracted to the work they did because they really could see results.”

Although she was married to Denis Thatcher 27 years ago in Wesley’s own chapel in the City of London, she has since moved towards Anglicanism and I asked her about this shift.

“So throughout my life I have felt the need for both things, to some extent for the informality, for the works you do; but always I found myself groping out for more of the actual teaching of the religious basis. As I say, I went for something a little more formal. I suppose it’s first one’s belief and then one’s background.”