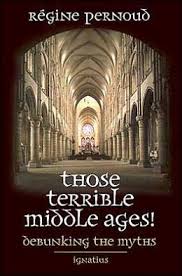 Regine Pernoud wrote the book shown above, published by Ignatius Press and translated by Anne Englund Nash, and she would agree with Stephen Cooper, who "argues that we should resist using ‘medieval’ as another word for backward." He goes on to outline what we should know about the medieval period, especially the 15th century, in his article titled "Positively Medieval" in History Today:

The work of the late Dom David Knowles showed that monasticism was far from corrupt and decadent, although the heroism and austerity of the High Middle Ages may have been lost. Eamon Duffy has demonstrated that religion was thriving at parish level. In The Practice of Kingship Jeremy Catto argues that most 15th-century bishops were graduates, learned men who were both efficient administrators and conscientious diocesans. As for the origins of Protestantism, McFarlane was sceptical that these were to be found in the Lollard heresy. He showed that this had been rooted out of Oxford and respectable society by the time of the Lollard rebellion known as Oldcastle’s Revolt (1414). It survived, though tenaciously, among country ‘bumpkins’ only. By implication the origins of the Reformation lay not in the decline of the medieval Church but in the difficult family life of Henry VIII.

We can see for ourselves, in the glories of Perpendicular architecture in the parish churches, cathedrals, the abbeys, chantry chapels and collegiate churches and in the colleges of Oxford and Cambridge, that the Church was by no means in decline in the 15th century. On the contrary, there was a flowering of piety, especially lay piety. Men were building and re-building to the glory of God and for the benefit of their souls, right down to the Reformation. What changed, when that came, was doctrine and fashion. The abbeys and the chantries were torn down because men had ceased to believe in the notion of Purgatory, at least officially, though their late medieval ancestors (apart from the Lollards) had taken this so seriously.

In secular architecture it was traditionally the Tudor period that saw the transition from castle to manor house; W.G. Hoskins popularised the idea of a ‘Great Rebuilding’ of more humble dwellings between 1550 and 1640. Yet this does not mean that there was no rebuilding in the 15th century. A later building may obscure an earlier one. Take Richard Beauchamp, 13th Earl of Warwick (1382-1439), father-in-law of that quintessential ‘medieval’ figure, Warwick the Kingmaker. He built or rebuilt castles and manor houses at Warwick, Hanley, Drayton Basset, Elmsley, Caversham and Hanslope and, when he died in 1439, he was buried in a magnificent tomb in St Mary’s Church in Warwick. This has a bronze effigy and weepers, the work of a Flemish master, just as beautiful and impressive as the much better known ‘Renaissance’ effigy of Henry VII by Torrigiano in Westminster Abbey. Yet, according to traditional chronology, Warwick is a ‘medieval’ figure, while Henry VII is ‘early modern’. In fact, there are wonderful 15th-century timber and plaster buildings everywhere one looks in England, but we have become accustomed to describe these as ‘Tudor’.

In literature, we have been taught that Geoffrey Chaucer (c.1343-1400) was a genius, but John Lydgate (c.1370-c.1451) was a dunce; and that the whole of the 15th century, at least before the advent of the printing press, was a fallow period. Yet in his own day men enjoyed Lydgate and rated him. Henry V and his brothers, Bedford and Gloucester, were all bibliophiles; and there is a good case for saying that English Humanism began in the 15th, rather than in the 16th, century (see Daniel Wakelin’s Humanism, Reading and English Literature 1450-1530). In law, we have been taught to think that ‘medieval’ means backward and ‘modern’ means advanced; but it is in the works of Sir John Fortescue (c.1394-1476) that we find the classic statement that torture is contrary to the common law of England, while in the 17th century the state used it routinely, at least so far as Catholic conspirators were concerned.

"We were taught," "we have been taught"--when Cooper uses such phrases in the article, the traditional Whig is being knocked askew yet again. That old Whig view, espoused by historians like David Hume and James Froude in Scotland and England, and adopted by the Enlightenment philosophes of France, that the Middle Ages were the Dark Ages, worthy of nothing but ridicule, avoided by historians because of their superstition, papistry, and obscurity--it's still with us today. Think of William Manchester's A World Lit Only by Fire, which even Thomas Cahill notes is filled with Anti-Catholic prejudice and "one howler after another" (see Cahill's Mysteries of the Middle Ages, which demonstrates some of his own unexamined prejudies with a ridiculous emphasis on attacking George W. Bush and promoting "Voice of the Faithful" and "Call to Action"). 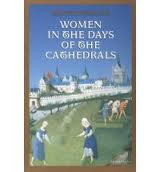 Pernoud's slender volume is filled with almost Chestertonian paradoxes: one of the most memorable to me now is that she contrasts medieval Gothic and renaissance Classicism in architecture by noting that the architects, even though anonymous in the Middle Ages, innovated in developing the soaring perpendicular Gothic cathedrals: renaissance architects copied the architecture of Greece and Rome. I enjoyed Pernoud's debunking of the myths (the same myths Manchester repeated and Cahill regretted); I enjoyed her book on Women in the Age of the Cathedrals even more.

I was reading it on an airplane years ago, and another (female) passenger expressed some deprecatory interest--"I expect there's not much to say about women in those days, since we were so oppressed". You might anticipate my reply (but I'll tell you anyway)--"Au contraire; you should read Pernoud's book: you would discover how much economic and intellectual freedom women had in the Middle Ages!" I doubt she read the book, don't you?. Someday, I hope these old Whig ideas will be completely debunked and exposed, but it will take a long time for the easy prejudgements Pernod describes in Those Terrible Middle Ages and I experienced in the late twentieth century to be replaced by more thoughtful appreciation of an essential period of European history.
Posted by Stephanie A. Mann at 12:30 AM