Queen Catherine of Aragon (and my father in WWII!) At Kimbolton 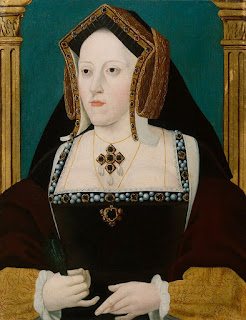 It's appropriate that I posted yesterday on the birth of Jane Dormer, lady-in-waiting to Queen Catherine of Aragon yesterday, because she was with the Queen when she died in Kimbolton Castle on January 7, 1536. The On the Tudor Trail Blog describes her last two days:

On the 6th of January all was well but that evening things took a turn for the worse. Catherine’s condition deteriorated and she knew her end was near. According to Giles Tremlett [in Catherine of Aragon: Henry’s Spanish Queen], Catherine’s famous last letter that she is said to have dictated to her husband from her deathbed ‘is almost certainly fictitious’ (Pg. 422). He does though concede that the letter may have reflected what she was feeling in the early hours of the 7th of January. This is what was penned:


My most dear Lord, King, and Husband, The hour of my death now approaching, I cannot choose but, out of the love I bear you, to advise you of your soul’s health, which you ought to prefer before all considerations of the world or flesh whatsoever. For which yet you have cast me into many calamities, and yourself into many troubles. But I forgive you all, and pray God to do so likewise. For the rest, I commend unto you Mary, our daughter, beseeching you to be a good father to her. I must entreat you also to look after my maids, and give them in marriage, which is not much, they being but three, and to all my other servants, a year’s pay besides their due, lest otherwise they should be unprovided for until they find new employment. Lastly, I want only one true thing, to make this vow: that, in this life, mine eyes desire you alone, May God protect you.

Death now had a firm grip on Catherine and the bishop of Llandaff** administered extreme unction. Prayer had been Catherine’s companion all her life and now in her final moments it was her only consolation.

On the 7th January at approximately two o’clock, Catherine of Aragon, left all her worldly troubles behind. Henry’s Spanish Queen was no more and Henry’s court was left to celebrate.

Eric Ives claims that the news of Catherine’s death was greeted at court ‘by an outburst of relief and enthusiasm for the Boleyn marriage’ (Pg. 295). This seems very plausible considering that their great enemy was now dead and that Queen Anne Boleyn was pregnant with the heir to the Tudor throne.

At hearing the news of his first wife’s death, Henry cried, ‘God be praised that we are free from all suspicion of war!’ (Ives, Pg. 295). Anne was overjoyed and rewarded the messenger who brought the news to Greenwich a ‘handsome present’ – for the first time in her reign; Anne was now the one and only Queen of England.

**The bishop of Llandaff was George de Athequa, a Spaniard by birth, who had come to England with the Princess Catherine in 1501. He left England in 1537 and the former Gilbertine prior of Wattan, Robert Holgate, succeeded him.

Henry VIII did not allow their daughter Mary to visit her mother during Catherine's last illness. She wasn't allowed to attend her funeral either.

Eustace Chapuys, who had visited her in the days before her death, did not attend the funeral when he learned she would be buried as the Dowager Princess of Wales, not the former (anointed and crowned) Queen of England. 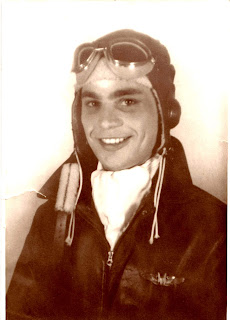 In a strange coincidence, my late father was stationed at RAF Kimbolton during World War II as part of the Army Air Forces 379th Bombardment Group, flying in a B-17 ("Heaven Can Wait) as a gunner (nose turret and waist)!! Here is his record; perhaps I should send his photo to this organization!! (I'll check with my siblings).
Posted by Stephanie A. Mann at 12:00 AM