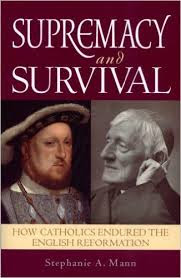 Just so you have it handy for your listening pleasure--and to download if you wish--here's the podcast of my interview with Al Kresta on January 15, the 485th anniversary of Henry VIII proclaiming himself "Henricus Octavus, Dei gratia Angliæ et Franciæ Rex, Fidei Defensor et Dominus Hiberniæ, et in Terra Supremum Caput Anglicanæ Ecclesiæ": Henry the VIIIth, by the Grace of God King of England and France, Defender of the Faith, Lord of Ireland, and on earth Supreme Head of the Church of England"!

One chronological point about this date in the context of the timeline of the English Reformation to clarify: Oaths of Succession had already been submitted for secular and religious men to take: Sir Thomas More and Bishop John Fisher had been in the Tower of London since the middle of April, 1534 because they refused to swear that oath. It did not proclaim Henry the Supreme Head of the Church of England but it did deny the spiritual or ecclesiastical authority of the Pope in England, especially when it interfered with the Succession and Henry's marital affairs.

When Henry VIII made this declaration of his new title, the Parliamentary Act of Supremacy and the Treasons Act were already in place--since November of 1534. At their trials, the crucial act for the government to prove was that both More and Fisher had denied that Henry VIII was the Supreme Head of the Church of England; thus they had committed Treason and were condemned traitors to be hanged, drawn, and quartered. At both of their trials, Sir Richard Rich was the star witness to their acts of treason: Sir Thomas More vehemently protested that he would never have confided to such a person his thoughts on a matter he had told no one else, not even his family!

I first met Al Kresta in 2011 at the Catholic Writers Guild/Catholic Marketing Network Trade Show. He has been kind enough to recommend my book to "anyone interested in this topic" ever since! He says so at the very end of this interview!
Posted by Stephanie A. Mann at 12:00 AM

Email ThisBlogThis!Share to TwitterShare to FacebookShare to Pinterest
Labels: Al Kresta, Catholics in England, Henry VIII, Kresta in the Afternoon, radio interviews, Supremacy and Survival, Supreme Head of the Church of England