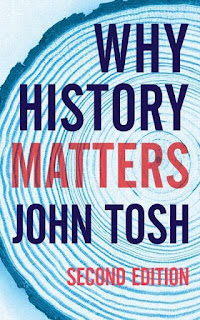 Just a reminder that I'll be on the Son Rise Morning Show at about 6:50 a.m. Central/7:50 a.m. Eastern to talk about a few of the big historical anniversaries to be commemorated this year: The Battle of Thermopylae, the birth of St. Genevieve of Paris, the murder/martyrdom of St. Thomas a Becket, the promulgation of Regnans in Excelsis by Pope St. Pius V (and the torture and execution/martyrdom of Blessed John Felton, father of Blessed Thomas Felton, the only Minim martyr of the recusant period).

So why do we commemorate these anniversaries? Other than the passage of time, why are they significant? Why does the past matter? Does history matter? (John Tosh argues that it does!) I believe it does also!

One thing the commemoration of anniversaries prove is that history--the past and the interpretation of the past--should be ever be considered a dull subject. If it's made into a dull subject, shame on the teacher in the classroom or not. The fact that an event that occurred two thousand and five hundred years ago or less is still remembered today means that the past impacts us today. For example, the impact of the Battle of Thermopylae: the Council on Foreign Relations opines that the sacrifice of the Spartans in that pass set up the Greek victory against the Persians at Salamis that same year. Thus: "The Greek city states survived, and with them, what would become Western Civilization."

So the sacrifice of Spartans at Thermopylae allowed Greek culture, philosophy, pedagogy, science, art, architecture, and literature to thrive and develop in a free society. Free for citizens and men, of course--there are always limits to golden age perfection. Nevertheless we can state that ancient Greek culture has had and still has significant influence on Western Civilization.

The Catholic Church in Paris has published a website about the anniversary of St. Genevieve's birth and the events taking place to celebrate her birth in Nanterre because of her significance to the history of the city of Paris and the Catholic faith in Paris. The website includes a brief video from the Cure of St. Etienne-du-Mont in which he describes St. Genevieve as a dynamic woman of action and prayer, loving Jesus and her neighbor, serving the common good of the people of Paris and promoting peace. So commemorating the 1600th anniversary of her birth offers the Catholics of Paris an opportunity to celebrate a great saint, her influence on their city, the centuries of devotion--including the statues and stained glass windows in the churches of Paris and in the city depicting her--and emphasize the importance of the Catholic Church even in officially secularized France. They even created a pilgrimage guide to sites in central Paris associated with St. Genevieve!

After the devastating fire on April 15, 2019 at the Cathedral of Notre Dame, such a celebration of heritage and history offers some consolations.

St. Genevieve and St. Joan of Arc are linked as great defenders of Paris and France. Among the other anniversaries to mark this year is the 100th anniversary of St. Joan of Arc in Rome by Pope Benedict XV in 1920 in the midst of France's recovery from the devastation of World War I--but more about that later. It's important to note that St. Genevieve is venerated in the Eastern Orthodox Church too.

So the 850th anniversary of St. Thomas a Becket's martyrdom and the 450th anniversary of Regnans in Excelsis each have their own historical significance. Their impact on Church-State relations in the 12th and 16th centuries and beyond mean that historians discuss their influence on us today as the tensions between secular governments and religious institutions are ever-present, even though they don't lead to martyrdom and excommunication!

During my discussion on the Son Rise Morning Show, I'll also some suggest some ways to celebrate these anniversaries in case you aren't planning trips to Greece, England, or Paris this year!
Posted by Stephanie A. Mann at 12:00 AM