On "Kresta in the Afternoon" TODAY 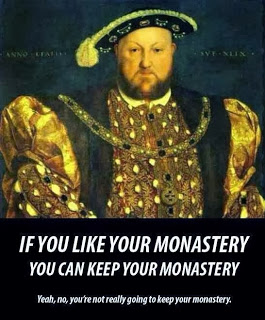 Before I go to my Holy Hour of Adoration today, I am going to record a segment for Kresta in The Afternoon, which will be aired later today. I'm not sure when it will be aired during his two hour show, but we are going to discuss Henry VIII being named Supreme Head and Governor of the Church in England and what it meant for Catholics in England.

What did it mean for Catholics in England at the time? Did they expect any real changes in doctrine, worship, and discipline? Except for a few, like the Carthusians, and the Observant Franciscans, and Sir Thomas More, and Bishop John Fisher, most probably thought that Henry VIII becoming the Supreme Head and Governor of the Church of England meant that everything as far as doctrine--except for the Pope--and worship--except for the Pope (as he was cited in the prayers at Mass and in the Divine Office)--and morals would remain the same.

By December 24, 1545, Henry VIII may have not been sure what he wanted to achieve as the Supreme Head and Governor of the Church of England. He was certainly disappointed that there was so much division in the Church, but there had been at least two parties, the reforming Lutherans and the conservative Catholics, from the beginning, contending for influence over the king. From 1536 to 1545, religious practice in England changed from being more Lutheran to being more Catholic: the Ten Articles and the Bishops Book; then the Six Articles and the King's Book; the suppression of the monasteries and the friaries; the fall of Cromwell; the Chantries Act; and at the end of Henry VIII's reign, the Lutheran/Calvinist party prepared to seize power when he died.

According to G.W. Bernard, in The King’s Reformation: Henry VIII and the Remaking of the English Church:

The king sought a middle way between Rome and Zurich, between Catholicism and its associated superstitions on one hand and the subversive radicalism of the reformers on the other. With a ruthlessness that verged on tyranny, Henry VIII determined the pace of change in the most important twenty years of England’s religious development.

I think it's hard to know what Henry VIII intended to achieve at the beginning of his control over the Church of England beyond consolidating his dynasty's succession.
Posted by Stephanie A. Mann at 12:00 AM

Email ThisBlogThis!Share to TwitterShare to FacebookShare to Pinterest
Labels: Al Kresta, Catholics in England, dissolution of the monasteries, Henry VIII, Kresta in the Afternoon, radio interviews, Supreme Head and Governor