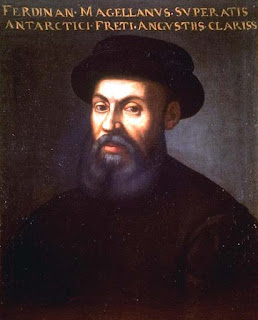 
The Mariner's Museum and Park website describes the voyage on which the Portuguese explorer Ferdinand Magellan discovered the Straits of Magellan:

By the end of October 1517, Magellan was in Seville, becoming a Spanish citizen. King Charles I funded Magellan and he set sail September 20, 1519 with a fleet of five ships and roughly 200 men. The five ships were: the Trinidad, captained by Magellan; San Antonio, captained by Juan de Cartagena; Concepción, captained by Gaspar de Quesada; Victoria, captained by Luis de Mendoza; and the Santiago, captained by Juan Serrano. They stopped at the Canary Islands to pick up some supplies, and then continued into the Atlantic Ocean. Magellan received a letter that the Spanish officers planned to kill him after leaving the Canaries. Magellan remained on guard for his life throughout much of the trip. They sailed for several weeks, and by November 20, they crossed the equator into the southern hemisphere. In December, they stopped at Guanabara Bay in southeastern Brazil to resupply once again.

Magellan’s fleet continued on down the coast of South America. He was searching for a passage that connected one ocean to the other. As their journey went on, life at sea became difficult. Food and water became rationed, and the crew was not happy. On April 1, 1520, while at Port St. Julian, the three captains Cartagena, Mendoza, and Quesada called their crews to mutiny. The mutiny was crushed by Magellan. Mendoza had been killed during the mutiny. Quesada and Cartagena were found guilty of murder and treason. Quesada was beheaded for his crime, while Cartagena was left marooned – or stranded – on land when the fleet left. The fleet traveled onward. While near Santa Cruz, the Santiago wrecked while on a scouting mission. They continued south and on October 21, 1520 he finally found the passage they were searching for. Shortly after entering the passage, the San Antonio deserted the mission. On November 8, 1520 the Trinidad, Concepción, and Victoria reached the “Sea of the South.” Today we know it as the Pacific Ocean. This passage at the tip of South America that Ferdinand Magellan had found would later be renamed the Strait of Magellan.

This site offers the clarification that Magellan thought that on October 21, 1520 he'd found the passage to the Pacific Ocean. It was on All Saints Day that he named the passage he'd found:

On October 21, 1520, Portuguese explorer Ferdinand Magellan and his fleet of ships reached Cape Virgenes, the southeastern tip of continental Argentina. Based on the geography of the region, Magellan came to the conclusion that he had found the passage into the Pacific that he was looking for.

As they traveled through it on November 1, which is All Saints' Day, Magellan called this passage Estrecho de Todos los Santos (All Saints' Channel). His assistant Antonio Pigafetta, on the other hand, called it the Pantagonian Strait. Then there were other crew members who called it the Victoria Strait, after the first ship to enter the passage, Victoria. Eventually, it was named Estrecho de Magallanes, or the Strait of Magellan, in the honor of Ferdinand Magellan.

As the Mariner's Museum and Park website continues the story:

Ferdinand Magellan had problems along the way, but he had finally reached the Pacific Ocean. Once through the strait, Magellan continued northward up the coast of Chile. In March the reached the island we now know as Guam. Here, they found and ate fresh food for the first time in 99 days. Having found a route through South America, Magellan was still determined to reach the Spice Islands. He and his fleet continued west. Along their course, they noticed a constant flow of wind. This air provided steady winds to their back which was very helpful to their sailing. Magellan and his crew had unknowingly discovered “trade winds.” The name would come from the important role they would later play in transoceanic trade. Their journey continued until they reached the Philippines in March of 1521. By this point, Magellan had endured a somewhat difficult yet successful journey. . . . 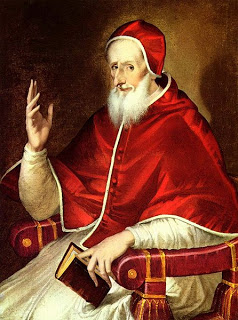 The 450th anniversary of Pope Saint Pius V's Papal Bull, Regnans in Excelsis on April 27, 1570, means it is also the 450th anniversary of Blessed John Felton's martyrdom. Regnans in Excelsis not only declared Elizabeth I excommunicated (as her father Henry VIII had been before her) but declared her deposed from the throne and stated that her subjects' vows to her were null and void:
And moreover, we declare her to be deprived of her pretended title to the kingdom aforesaid, and of all dominion, dignity and privilege whatsoever;

And also declare the nobles, subjects and people of the said realm and all others who have in any way sworn oaths unto her, to be forever absolved from any such oath and from any duty arising from duty, lordship, allegiance and obedience; and we do, by authority of these presents so absolve them, and so deprive the same Elizabeth of her pretended title to the crown and all other the abovesaid matters. We charge and command all and singular the nobles, subjects, peoples and others aforesaid that they do not dare obey her orders, mandates and laws. Those who shall act to the contrary we include in the like sentence of excommunication.

Bit of an overreach on how much authority Pope Pius V really had! or the power he had to enforce such declarations.

Blessed John Felton posted a copy of this Papal Bull less than a month later and suffered for it in the aftermath of the Northern Rebellion of 1569-1570:

When Pius V published the bull of excommunication and deprivation against Elizabeth, Felton obtained copies of it from the Spanish ambassador's chaplain, who immediately left the kingdom. Felton published the bull in this country by affixing a copy to the gates of the Bishop of London's palace between two and three o'clock of the morning of 15 May 1570. The government, surprised at and alarmed by this daring deed, at once ordered a general search to be made in all suspected places, and another copy of the bull was discovered in the chambers of a student of Lincoln's Inn, who confessed, when put to the rack, that he had received it from Felton. The next day the lord mayor, the lord chief justice, and the two sheriffs of London, with five hundred halberdiers, surrounded Bermondsey Abbey early in the morning. Felton, guessing their errand, opened the doors and gave himself into their custody, frankly admitting that he had set up the bull. He was conveyed to the Tower, where he was placed on the rack, but he resolutely refused to make any further confession. 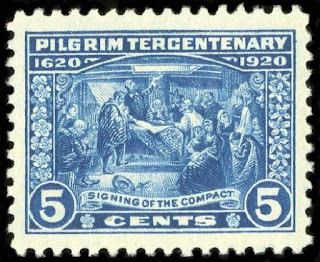 Finally, the 400th anniversary of the Mayflower Compact. As the History Channel website explains:

The Mayflower Compact was a set of rules for self-governance established by the English settlers who traveled to the New World on the Mayflower. When Pilgrims and other settlers set out on the ship for America in 1620, they intended to lay anchor in northern Virginia. But after treacherous shoals and storms drove their ship off course, the settlers landed in Massachusetts instead, near Cape Cod, outside of Virginia’s jurisdiction. Knowing life without laws could prove catastrophic, colonist leaders created the Mayflower Compact to ensure a functioning social structure would prevail. . . .

Seeking the right to worship as they wished, the Pilgrims had signed a contract with the Virginia Company to settle on land near the Hudson River, which was then part of northern Virginia. The Virginia Company was a trading company chartered by King James I with the goal of colonizing parts of the eastern coast of the New World. London stockholders financed the Pilgrim’s voyage with the understanding they’d be repaid in profits from the new settlement.

The History Channel website describes the significance of the Mayflower Compact thusly:

The Mayflower Compact was important because it was the first document to establish self-government in the New World. It remained active until 1691 when Plymouth Colony became part of Massachusetts Bay Colony.

The Mayflower Compact was an early, successful attempt at democracy and undoubtedly played a role in future colonists seeking permanent independence from British rule and shaping the nation that eventually became the United States of America.
Posted by Stephanie A. Mann at 12:00 AM