For Good Friday: My Song Is Love Unknown 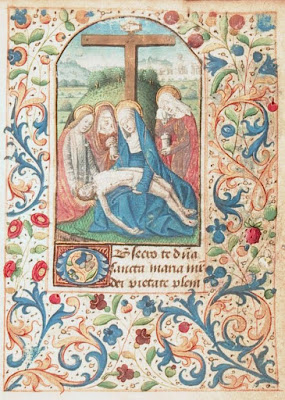 My song is love unknown,
My Saviour’s love to me;
Love to the loveless shown,
That they might lovely be.
O who am I,
That for my sake
My Lord should take
Frail flesh and die?

He came from His blest throne
Salvation to bestow;
But men made strange, and none
The longed-for Christ would know:
But O! my Friend,
My Friend indeed,
Who at my need
His life did spend.

Sometimes they strew His way,
And His sweet praises sing;
Resounding all the day
Hosannas to their King:
Then “Crucify!”
is all their breath,
And for His death
they thirst and cry.

Why, what hath my Lord done?
What makes this rage and spite?
He made the lame to run,
He gave the blind their sight,
Sweet injuries!
Yet they at these
Themselves displease,
and ’gainst Him rise.

They rise and needs will have
My dear Lord made away;
A murderer they save,
The Prince of life they slay,
Yet cheerful He
to suffering goes,
That He His foes
from thence might free.

In life no house, no home,
My Lord on earth might have;
In death no friendly tomb,
But what a stranger gave.
What may I say?
Heav'n was his home;
But mine the tomb
Wherein he lay.

Here might I stay and sing,
No story so divine;
Never was love, dear King!
Never was grief like Thine.
This is my Friend,
in Whose sweet praise
I all my days
could gladly spend.

According this United Methodist Church site:

Samuel Crossman (1624-1684), an Anglican minister, received a bachelor of divinity at Penbroke (sic) [Pembroke] College, Cambridge. He then served both an Anglican parish at All Saints, Sudbury, and a Puritan congregation. Crossman sympathized with the Puritan cause as a dissenting religious body within the context of the Anglican Church of England. He participated in the 1661 Savoy Conference, which attempted to revise the Book of Common Prayer so that it could serve both Puritans and Anglicans. The Conference was unsuccessful, and the 1662 Act of Uniformity expelled some 2,000 Anglican ministers, including Crossman. He recanted and was soon ordained in 1665, becoming a royal chaplain. He was called to a position in Bristol in 1667 and became Dean of Bristol Cathedral in 1683. This poignant meditation of the Passion of Christ was published just before Crossman’s ordination, in The Young Man’s Meditation (1664). This short book of poems was reprinted in 1683, and the poem appeared for the first time as a hymn in the Anglican Hymn Book in 1686, just two years after the author’s death.

On the first line of the poem, I have linked a performance of the hymn setting by John Ireland. The illustration is from the Book of Hours of Angers.
Posted by Stephanie A. Mann at 12:30 AM