Blessed John Henry Newman and the Passion of Christ 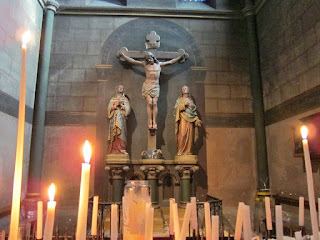 On the Monday of Holy Week, April 15, Anna Mitchell of the Son Rise Morning Show and I will talk about Newman's Parochial and Plain Sermon, "The Crucifixion" in which he encouraged his congregation to meditate on the suffering, crucifixion, and death of Jesus. We'll talk at the usual time--about 7:50 a.m. Eastern/6:50 a.m. Central. He urges them to have some feeling--not just for the sake of some superficial feeling--for their Savior. If we love Him, we should feel pain at His pain:

ST. PETER makes it almost a description of a Christian, that he loves Him whom he has not seen; speaking of Christ, he says, "whom having not seen, ye love; in whom, though now ye see Him not, yet believing, ye rejoice with joy unspeakable and full of glory." Again he speaks of "tasting that the Lord is gracious." [1 Pet. i. 8; ii. 3.] Unless we have a true love of Christ, we are not His true disciples; and we cannot love Him unless we have heartfelt gratitude to Him; and we cannot duly feel gratitude, unless we feel keenly what He suffered for us. I say it seems to us impossible, under the circumstances of the case, that any one can have attained to the love of Christ, who feels no distress, no misery, at the thought of His bitter pains, and no self-reproach at having through his own sins had a share in causing them.

I know quite well, and wish you, my brethren, never to forget, that feeling is not enough; that it is not enough merely to feel and nothing more; that to feel grief for Christ's sufferings, and yet not to go on to obey him, is not true love, but a mockery. True love both feels right, and acts right; but at the same time as warm feelings without religious conduct are a kind of hypocrisy, so, on the other hand, right conduct, when unattended with deep feelings, is at best a very imperfect sort of religion. And at this time of year especially are we called upon to raise our hearts to Christ, and to have keen feelings and piercing thoughts of sorrow and shame, of compunction and of gratitude, of love and tender affection and horror and anguish, at the review of those awful sufferings whereby our salvation has been purchased.

You will ask, how are we to learn to feel pain and anguish at the thought of Christ's sufferings? I answer, by thinking of them, that is, by dwelling on the thought. This, through God's mercy, is in the power of every one. No one who will but solemnly think over the history of those sufferings, as drawn out for us in the Gospels, but will gradually gain, through God's grace, a sense of them, will in a measure realize them, will in a measure be as if he saw them, will feel towards them as being not merely a tale written in a book, but as a true history, as a series of events which took place. It is indeed a great mercy that this duty which I speak of, though so high, is notwithstanding so level with the powers of all classes of persons, learned and unlearned, if they wish to perform it. Any one can think of Christ's sufferings, if he will; and knows well what to think about. "It is not in heaven that thou shouldst say, Who shall go up for us to heaven and bring it to us, that we may hear it and do it? Neither is it beyond the sea that thou shouldst say, Who shall go over the sea for us? ... but the word is very nigh unto thee;" very nigh, for it is in the four Gospels, which, at this day at least, are open to all men. All men may read or hear the Gospels, and in knowing them, they will know all that is necessary to be known in order to feel aright; they will know all that any one knows, all that has been told us, all that the greatest saints have ever had to make them full of love and sacred fear.

This sermon demonstrates Newman's zeal to have his congregation recognize the reality of their faith, or renew their sense of that reality so that it had some palpable influence in their lives, changing their hearts, chastening their religious duty, demonstrating their love for Jesus by having compassion upon Him in His sufferings. As Matthias Grünewald used his artistic technique as a painter to inspire compassion for Jesus's sufferings in "The Small Crucifixion" which Elizabeth Lev calls a "vivid, visual homily" in this month's Magnificat, Blessed John Henry Newman used his artistic technique as a writer to inspire the same depth of feelings, particularly by asking his congregation to think about how they'd feel seeing an animal, a child, an elderly man treated as Jesus was treated. 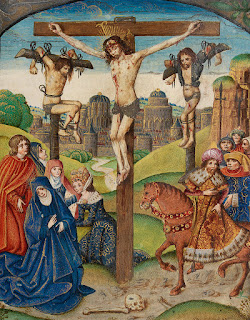 Other sermons on this theme are "Christ's Privations a Meditation for Christians" in which Newman asks:

Why is it, my brethren, that we have so little feeling on the matter as we commonly have? Why is it that we are used to let the season come and go just like any other season, not thinking more of Christ than at other times, or, at least, not feeling more? Am I not right in saying that this is the case? and if so, have I not cause for asking why it is the case? We are not moved when we hear of the bitter passion of Jesus Christ, the Son of God, for us. We neither bewail our sins which caused it, nor have any sympathy with it. We do not suffer with Him. If we come to Church, we hear, and then we go away again; not distressed at all; or if distressed, only for the moment.

and "The Incarnate Son, a Sufferer and Sacrifice":

We are now approaching that most sacred day when we commemorate Christ's passion and death. Let us try to fix our minds upon this great thought. Let us try, what is so very difficult, to put off other thoughts, to clear our minds of things transitory, temporal, and earthly, and to occupy them with the contemplation of the Eternal Priest and His one ever-enduring Sacrifice;—that Sacrifice which, though completed once for all on Calvary, yet ever abideth, and, in its power and its grace, is ever present among us, and is at all times gratefully and awfully to be commemorated, but now especially, when the time of year is come at which it was made. Let us look upon Him who was lifted up that He might draw us to Him; and, by being drawn one and all to Him, let us be drawn to each other, so that we may understand and feel that He has redeemed us one and all, and that, unless we love one another, we cannot really have love to Him who laid down His life for us.

As you might expect, he continued that theme as a Catholic priest and homilist: more on that Monday.

Images: Top: picture taken in St. Ambroise, Paris, by Mark U. Mann in 2014; Middle: Crucifixion from the Vaux Passional, published in the public domain under a Creative Commons License.
Posted by Stephanie A. Mann at 12:30 AM