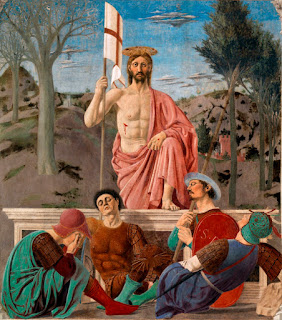 In the Extraordinary Form of the Latin Rite, this Sunday, the Sunday that ends the Easter Octave, is called either Low Sunday or Dominica in Albis, referring to the neophytes who had been baptized at the Easter Vigil putting aside their white baptismal garments and becoming part of their congregations. It has also been called Quasimodo Sunday because of this Sunday's Introit, whether Ordinary or Extraordinary Form:

Like newborn infants, you must long for the pure, spiritual milk, that in him you may grow to salvation, alleluia.

As the Catholic Encyclopedia explains this traditional nomenclature:

The origin of the name is uncertain, but it is apparently intended to indicate the contrast between it and the great Easter festival immediately preceding, and also, perhaps, to signify that, being the Octave Day of Easter, it was considered part of that feast, though in a lower degree. Its liturgical name is Dominica in albis depositis, derived from the fact that on it the neophytes, who had been baptized on Easter Eve, then for the first time laid aside their white baptismal robes. St. Augustine mentions this custom in a sermon for the day, and it is also alluded to in the Eastertide Vesper hymn, "Ad regias Agni dapes" (or, in its older form, "Ad cœnam Agni providi"), written by an ancient imitator of St. Ambrose. [An English adaptation is "At the Lamb's High Feast We Sing"] Low Sunday is also called by some liturgical writers Pascha clausum, signifying the close of the Easter Octave, and "Quasimodo Sunday". . .

In the Ordinary Form it is called Divine Mercy Sunday or the Second Sunday of Easter.

But to continue with the theme of Quasimodo Sunday: that's how the fictional "Hunchback of Notre Dame" gets his name. Because Claude Frollo, the Archdeacon of Notre Dame found the hunchbacked, deformed baby on the Second Sunday of Easter he named him after the introit's first word. As this website explains the word Quasimodo, we can see the sad joke Frollo was playing on the poor baby as he is "almost" "the standard of measure":

The quotation takes its cue from 1 Peter 2:2, which in the RSV reads, “Like newborn infants, long for the pure, spiritual milk, so that by it you may grow into salvation.” (Incidentally, the Latin in the Vulgate reads, “Sicut modo geniti infantes, rationale sine dolo lac concupiscite, ut in eo crescatis in salutem.”)

In her current state, the Cathedral of Notre Dame de Paris is "almost the standard of measure" of herself: she is standing, but she is deformed and damaged by the fire. She cannot be used for her true purpose of the worship of God the Father through the Sacrifice and Sacrament of the Mass, for prayer and devotion, for Baptisms, Confessions, and Weddings, etc. Her parishioners, those who go there every Sunday and throughout the week, have to go to other churches for Mass (although not technically a parish she serves as one for those in the neighborhood). As we continue to celebrate Easter and the new life Jesus brought us through the forgiveness of sins, I am sure that Notre Dame de Paris will someday be like herself again if we remember and protect what she is supposed to be: a church, not a monument, an Altar and a Tabernacle, not a tourist destination.

Christ is Risen! Truly, He Risen! 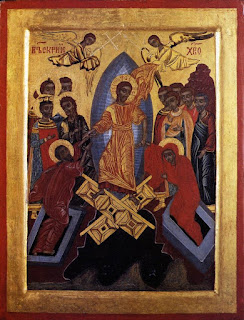 Happy Easter to all Orthodox Christians! Alleluia! Alleluia!
Posted by Stephanie A. Mann at 12:30 AM