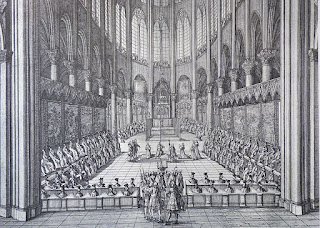 On April 24, 1558, Mary Stuart, the Queen of Scotland, married Francois (or Francis), the Dauphin of France in the Cathedral of Notre-Dame de Paris. The illustration above dates from the reign of King Louis XIV, but it shows how the Sun King had "renovated" or "wreckovated" the cathedral so it could be more useful for big royal events. When Mary and Francois married there would have been a Rood Screen between the nave and the sanctuary. The only church in Paris with a surviving Rood Screen is St. Etienne-du-Mont.

This History Today article explains how the marriage came about since Mary of Guise had sent her daughter to France to forestall the pressure from Henry VIII to arrange a marriage with his son and heir Edward: 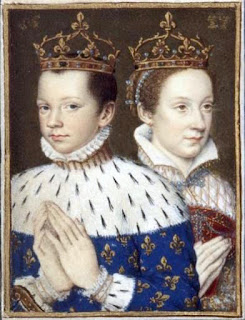 It was not a prospect Mary of Guise could tolerate and in 1548 the five-year-old Mary was sent to her grandmother Antoinette of Guise in France, where her Scottish entourage was considered appallingly barbarous and swiftly got rid of, and she was brought up as a Catholic Frenchwoman. French became her first language, she always called herself Marie Stuart and she loved dancing and hunting. She grew up delightfully charming, graceful and attractive, the French fell in love with her and Henry II of France resolved to marry her to his son and heir, the sickly dauphin Francis. A marriage treaty was signed with the Scots, which provided that Scotland and France should eventually be united under Mary and Francis as one kingdom. There were also secret agreements, which the youthful and inexperienced Mary signed, that would have made Scotland a mere adjunct of France.

Mary was fifteen and Francis fourteen when they were married with spectacular pageantry and magnificence in the cathedral of Notre Dame, Paris, by the Cardinal Archbishop of Rouen, in the presence of Henry II, Queen Catherine de’ Medici, the princes and princesses of the blood and a glittering throng of cardinals and nobles. The Duke of Guise was master of ceremonies. Mary in a white dress with a long train borne by two young girls, a diamond necklace and a golden coronet studded with jewels, was described by the courtier Pierre de Brantôme as ‘a hundred times more beautiful than a goddess of heaven … her person alone was worth a kingdom.’ The wedding was followed by a procession past excited crowds in the Paris streets to a grand banquet in the Palais de Justice with dancing far into the night.

This website provides more detail about the ceremony, the festivities, the procession to the Louvre, and the banquet there.

This wedding was one of the historical events that the mainstream media brought up after the fire at Notre Dame last week.
Posted by Stephanie A. Mann at 12:30 AM