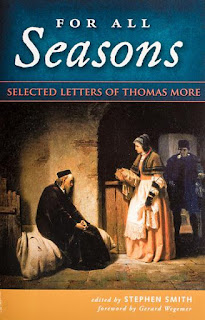 On April 13, 1534, Thomas More was presented with the Act of Succession and the oath it required at Lambeth Palace in the presence of three other Thomases and one William: Audley, Cranmer, Cromwell, and Benson (The last Abbot and first Dean of Westminster Abbey). Then More was held in the custody of Benson for a few days. By April 17 he was in the Tower of London and wrote to his daughter Meg about his questioning earlier that week. He left the Tower again for trial on July 1, 1535 and then for the last time on July 6, 1535 for his beheading.
The Latin Mass magazine published an article I wrote titled "The Long Lent of St. Thomas More" in its Winter/Spring 2015 issue (print or on-line subscription only). In it I demonstrated that More was preparing either for death from natural causes or by execution throughout those long months in the Tower of London:
From April 17, 1534, through the trial and execution of the three Carthusian priors (John Houghton, Augustine Webster, and Robert Lawrence) with Father John Haile and the Angel of Syon, Father Richard Reynolds on May 4, 1535; the trial and execution of John Cardinal Fisher in June of that year, and his own trial on July 1, 1535, Thomas More prepared for his death in the Tower of London. For more than 14 months in the Tower, More observed a Long Lent of repentance and devotion. He meditated on the Passion of Christ, particularly on His Agony in the Garden of Gethsemane. He prayed to repent of all past sins and to wean himself away from all worldly concerns and seems to have marked his progress toward preparing to die. The purpose of this article is to examine those methods of preparation and thereby trace signs of More’s progress and final acceptance of death.

I examine two of his Tower works: The Sadness of Christ and his "Godly Meditation" prayer and then look at More's progress toward death and martyrdom through his letters to his daughter Margaret Roper and of course his trial and execution. You may read many of the letters from the 14 months he was held in the Tower of London in a great collection with updated English spelling and punctuation from Scepter Publishers. Scepter also publishes an excellent edition of another of St. Thomas More's Tower Works, A Dialogue of Comfort Against Tribulation. Oh, and Scepter published my book too!

I was on Kresta in the Afternoon on Monday afternoon, discussing the events of April 13 through 17, 1534 with Dr. Matthew Bunson. You'll find the podcast of that program here.
Posted by Stephanie A. Mann at 12:30 AM

Email ThisBlogThis!Share to TwitterShare to FacebookShare to Pinterest
Labels: April 1534, Kresta in the Afternoon, Matthew Bunson, St. Thomas More, The Long Lent of St. Thomas More, the Oath of Succession, the Tower of London