After being struck by an iceberg on April 14, the R.M.S. Titanic sank on April 15, 1912. Gareth Russell has written a new book about this legendary disaster, which has been published in U.K. and Ireland and will be published in the U.S.A. later this year.

There are two different titles for the book. In the U.K. and Ireland it's titled The Darksome Bounds of a Failing World: The Sinking of the Titanic and the End of the Edwardian Era. 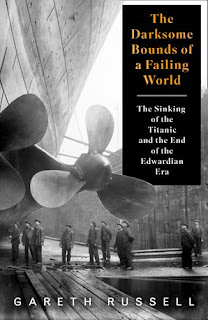 From the publisher, HarperCollins:


When the ship of dreams sank, so did the Edwardian era.
In this original and meticulously-researched narrative history, Gareth Russell considers the real story of the Titanic, and the seismic shift of modernity the 1910s have come to mark in the West.
Had she survived her first voyage, The Titanic probably would have dated like other ocean liners. Instead, within a week of setting sail on 10th April 1912, the disaster of her sinking had turned her into one of the biggest news stories of the century. Writing in his signature prose, Gareth Russell peers through the portholes of six first-class travellers to immerse us into the Edwardian era while demonstrating how modernity shook up the class system of the age.

Lucy Leslie, Countess of Rothes; “son” of the British Empire, Tommy Andrews; captain of the industry John Thayer and his son Jack; Jewish immigrant Ida Straus; and model and movie star Dorothy Gibson. Each subject’s unique story offers insights into the established hierarchy during the fin de siècle of pre-war Britain and America, the Titanic’s respective spiritual and economic homelands. Through these entwining lives, Russell investigates social class – its mores, its foibles, its accents, its etiquette, its benefits, its casual or intentional cruelties, its potential nobility. Those nuances also invite analyses of the shipping trade, the birth of the movie industry, the aristocracy, the American Gilded Age, the Irish Home Rule crisis, and Jewish-American communities.

The Titanic is the vessel in which we can extrapolate lessons on hubris, folly, greed, love, class, magnificent courage and pitiable weakness. She carried thousands of people and, in that way, she still has thousands of stories to tell. Drawing on brand new and unpublished materials, journal entries and film archives from the time, The Darksome Bounds of a Failing World focuses on the symbolism of the Titanic as the floating symbol of Anglo-American success, its clientele an apt illustration of the limitless – technological, financial – possibilities of its time. 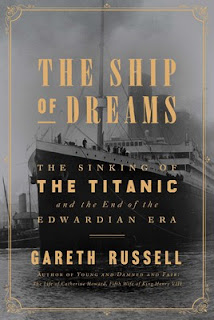 In the USA, the title is The Ship of Dreams (with the same subtitle). The publisher, Simon and Schuster, offers a variation on the theme:

In this original and meticulously researched narrative history, the author of the “stunning” (The Sunday Times) Young and Damned and Fair uses the sinking of the Titanic as a prism through which to examine the end of the Edwardian era and the seismic shift modernity brought to the Anglo-American world.

In April 1912, six notable people were among those privileged to experience the height of luxury—first class passage on “the ship of dreams,” the RMS Titanic: Lucy Leslie, Countess of Rothes; son of the British Empire, Tommy Andrews; American captain of industry John Thayer and his son Jack; Jewish-American immigrant Ida Straus; and American model and movie star Dorothy Gibson. Within a week of setting sail, they were all caught up in the horrifying disaster of the Titanic’s sinking, one of the biggest news stories of the century. Today, we can see their stories and the Titanic’s voyage as the beginning of the end of the established hierarchy of the Edwardian era.

Writing in his elegant signature prose and using previously unpublished sources, deck plans, journal entries, and surviving artifacts, Gareth Russell peers through the portholes of these first-class travelers to immerse us in a time of unprecedented change in British and American history. Through their intertwining lives, he examines social, technological, political, and economic forces such as the nuances of the British class system, the explosion of competition in the shipping trade, the birth of the movie industry, the Irish Home Rule Crisis, and the Jewish-American immigrant experience while also recounting their intimate stories of bravery, tragedy, and selflessness.

Masterful in its superb grasp of the forces of history, gripping in its moment-by-moment account of the sinking, revelatory in discounting long-held myths, and lavishly illustrated with color and black and white photographs, this absorbing, accessible, and authoritative account of the Titanic’s life and death is destined to become the definitive book on the subject.

I know the publishers have their wisdom in packaging and titling these books, but I'm almost always surprised that I like the U.K. titles better than the ones chosen for the USA! Seems to me that the subtitle should have been changed for the USA version: what does the "Edwardian Era" mean to U.S. readers? "The End of the Gilded Age" instead?

Gareth Russell contributed this article to the Belfast Telegraph in which he describes his personal connection to the legend of the RMS Titanic:

I was raised on stories of the Titanic. My great-grandfather, Tommy Hutton, used to perch me on his knee to tell me about the Belfast of his childhood.

Later, I would sit on the rug by his fireplace and he would perform the song he remembered his father and other workers in the shipyard singing when they heard the news of the disaster - "I lost the best friend that ever I had, when the great ship Titanic went down".

It was a very happy moment for me when I was able to include those words in one of the book's final chapters; it felt like I was preserving something and giving a voice to those men who had laboured in the construction and then suffered such grief when news broke in Belfast that the Titanic had sunk four days into her first commercial voyage.

I was enthralled and horrified by the Titanic as a child, and it was to Papa that I brought the first in a coming avalanche of Titanic books. It started with colouring books and moved to children's novels. To each and every one, Papa was encouraging, even though he himself could not read, because in 1912, he had snuck out of school to try to earn money for his family.

He knew the Bible better than nearly any man I ever knew; he memorised it at church and through sermons. It was a towering testimony to his faith.

As we so often say, "I can't wait!" but I'll have to because the US edition doesn't come out until this December!
Posted by Stephanie A. Mann at 12:30 AM

Email ThisBlogThis!Share to TwitterShare to FacebookShare to Pinterest
Labels: books, Gareth Russell, RMS Titanic, The Darksome Bounds of a Failing World, The Ship of Dreams, US and UK titles