Newman on the Assumption of the BVM 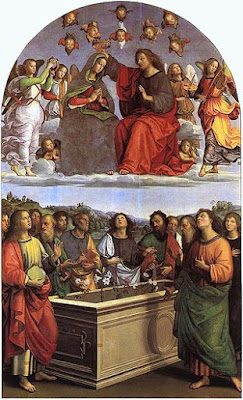 From his Discourses to Mixed Congregations: "Discourse 18. On the Fitness of the Glories of Mary":

. . . it is a great evidence of truth, in the case of revealed teaching, that it is so consistent, that it so hangs together, that one thing springs out of another, that each part requires and is required by the rest.

This great principle, which is exemplified so variously in the structure and history of Catholic doctrine, which will receive more and more illustrations the more carefully and minutely we examine the subject, is brought before us especially at this season, when we are celebrating the Assumption of our Blessed Lady, the Mother of God, into heaven. We receive it on the belief of ages; but, viewed in the light of reason, it is the fitness of this termination of her earthly course which so persuasively recommends it to our minds: we feel it "ought" to be; that it "becomes" her Lord and Son thus to provide for one who was so singular and special, both in herself and her relations to Him. We find that it is simply in harmony with the substance and main outlines of the doctrine of the Incarnation, and that without it Catholic teaching would have a character of incompleteness, and would disappoint our pious expectations.

Let us direct our thoughts to this subject today, my brethren; and with a view of helping you to do so, I will first state what the Church has taught and defined from the first ages concerning the Blessed Virgin, and then you will see how naturally the devotion which her children show her, and the praises with which they honour her, follow from it.

Now, as you know, it has been held from the first, and defined from an early age, that Mary is the Mother of God. She is not merely the Mother of our Lord's manhood, or of our Lord's body, but she is to be considered the Mother of the Word Himself, the Word incarnate. God, in the person of the Word, the Second Person of the All-glorious Trinity, humbled Himself to become her Son. Non horruisti Virginis uterum, as the Church sings, "Thou didst not disdain the Virgin's womb". He took the substance of His human flesh from her, and clothed in it He lay within her; and He bore it about with Him after birth, as a sort of badge and witness that He, though God, was hers. He was nursed and tended by her; He was suckled by her; He lay in her arms. As time went on, He ministered to her, and obeyed her. He lived with her for thirty years, in one house, with an uninterrupted intercourse, and with only the saintly Joseph to share it with Him. She was the witness of His growth, of His joys, of His sorrows, of His prayers; she was blest with His smile, with the touch of His hand, with the whisper of His affection, with the expression of His thoughts and His feelings, for that length of time. Now, my brethren, what ought she to be, what is it becoming that she should be, who was so favoured? . . . 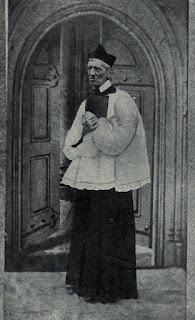 But in a festive season, my dear brethren, I must not weary you with argument, when we should offer specially to the Blessed Virgin the homage of our love and loyalty; yet, let me finish as I have begun;—I will be brief, but bear with me if I view her bright Assumption, as I have viewed her immaculate purity, rather as a point of doctrine than as a theme for devotion.

It was surely fitting then, it was becoming, that she should be taken up into heaven and not lie in the grave till Christ's second coming, who had passed a life of sanctity and of miracle such as hers. All the works of God are in a beautiful harmony; they are carried on to the end as they begin. This is the difficulty which men of the world find in believing miracles at all; they think these break the order and consistency of God's visible word, not knowing that they do but subserve a higher order of things, and introduce a supernatural perfection. . . .

Who can conceive, my brethren, that God should so repay the debt, which He condescended to owe to His Mother, for the elements of His human body, as to allow the flesh and blood from which it was taken to moulder in the grave? Do the sons of men thus deal with their mothers? do they not nourish and sustain them in their feebleness, and keep them in life while they are able? Or who can conceive that that virginal frame, which never sinned, was to undergo the death of a sinner? Why should she share the curse of Adam, who had no share in his fall? . . .

Also, here are some meditations on titles of Mary from Newman's Meditations and Devotions. Remember that Newman was writing and meditating upon Mary's Assumption more than one hundred years before Pope Pius XII defined the doctrine of the Assumption on November 1, 1950 in the Apostolic Constitution Munificentissimus Deus!
Posted by Stephanie A. Mann at 12:30 AM

Email ThisBlogThis!Share to TwitterShare to FacebookShare to Pinterest
Labels: Blessed John Henry Newman, Discourses to Mixed Congregations, Meditations and Devotions, the Glories of Mary, the Solemnity of the Assumption