The Princess Mary Refuses to Conform 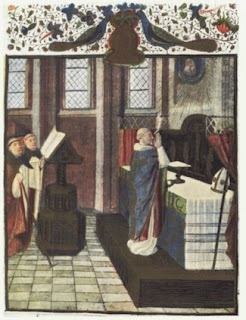 How appropriate and timely for a Sunday! The Princess Mary stood up to her brother and his minions adamantly when they tried to force her to give up attending the Catholic Mass in her household during August 1551. As this biography by Jean Marie Stone published in 1901 and based on primary sources describes the growing pressure on Henry VIII's eldest daughter, it began in March that year and increased through the spring and summer.

The law of Uniformity once passed, Edward’s ministers could only justify it by carrying it out logically; but in thus doing they cut through marrow and bone, and the acts of the Privy Council show the drastic nature of their dealings with the disobedient. On the 19th March, Sergeant Morgan had been summoned before the Council for hearing Mass at St. John’s, in the Lady Mary’s house, two or three days previously, “and not being able to excuse himself, because that, being a learned man, he should give so ill an example to others, he was committed to the Fleet prison”.[275]

On the 24th, Sir Anthony Browne was examined as to whether he had of late heard any Mass or not, when he answered, “that indeed twice or thrice at the New Hall; and once at Romford, as my Lady Mary was coming hither about ten days past, he had heard Mass. Which being considered as a notable ill example, was thought requisite to be corrected, and therefore he was committed to the Fleet.”[276]

On the same day, Rochester, Comptroller of Mary’s household, was interrogated as to “how many ordinary chaplains her Grace had”. He answered that she had four, namely Drs. Mallet, Hopton, Barker and Ricardes. But it was not until August that definite steps were taken to coerce the Princess into subjection. The story of the proceedings as it is told in the Acts of the Privy Council is dramatic.[277]


The English envoys having signified to the Emperor the ultimatum of Edward’s government on the 9th August, on the 15th, three of Mary’s servants, Rochester, Waldegrave and Sir Francis Englefield appeared before the Council, and were commanded on their return home, to call Mary’s chaplains together, and to inhibit them from further saying Mass in her house, or in any other place, contrary to the King’s laws, under pain of the King’s high indignation and displeasure. As Rochester made many excuses “to avoid the report of this matter unto her Grace and the execution thereof in her house, he was finally commanded on his allegiance to see it performed, and in case her Grace should dismiss him, and the rest out of her service, upon the receipt of this message (as he pretended she would) then was he and the rest commanded on the King’s Majesty’s behalf, neither to avoid her service nor to depart from her house, but to see this order prescribed unto them fulfilled until they should have further commandment from hence”.[278] 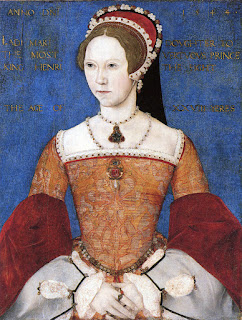 On August 19, 1551 Mary wrote to her half-brother Edward and emphasized that she had understood that she would be exempt from the Act of Uniformity, especially after the Holy Roman Emperor had threatened England with war if she were forced to conform:

They were then dismissed, and returned to Mary, but were summoned to appear again on the 24th, to give an account of their doings. In the meanwhile, the Princess wrote the following letter to Edward, which was perhaps more forcible than anything she had hitherto said in her defence:—

“My duty most humbly remembered unto your Majesty. It may please the same to be advertised, that I have by my servants received your most honourable letter, the contents whereof do not a little trouble me, and so much the more for that any of my servants should move or attempt me in matters touching my soul, which I think the meanest subjects within your realm could evil bear at their servants’ hands; having for my part utterly refused heretofore to talk with them in such matters, and of all other persons least regarded them therein; to whom I have declared what I think, as she which trusted that your Majesty would have suffered me, your poor humble sister and beadswoman, to have used the accustomed Mass, which the King your father and mine, with all his predecessors evermore used; wherein also I have been brought up from my youth, and thereunto my conscience doth not only bind me, which by no means will suffer me to think one thing and do another, but also the promise made to the Emperor, by your Majesty’s Council, was an assurance to me, that in so doing I should not offend the laws, although they seem now to qualify and deny the thing. And at my last waiting upon your Majesty, I was so bold to declare my mind and conscience to the same, and desired your Highness rather than you should constrain me to leave the Mass, to take my life, whereunto your Majesty made me a very gentle answer. And now I beseech your Highness to give me leave to write what I think touching your Majesty’s letters. Indeed they be signed with your own hand, and nevertheless in my opinion not your Majesty’s in effect, because it is well known (as heretofore I have declared in the presence of your Highness) that although our Lord be praised, your Majesty hath far more knowledge, and greater gifts than others of your years, yet it is not possible that your Highness can at these years be a judge in matters of religion. And therefore I take it, that the matter in your letter proceedeth from such as do wish these things to take place, which be most agreeable to themselves, by whose doings (your Majesty not offended) I intend not to rule my conscience. And thus, without molesting your Highness any further, I humbly beseech the same, ever for God’s sake to bear with me as you have done, and not to think that by my doings or ensample any inconvenience might grow to your Majesty, or your realm; for I use it not after any such sort, putting no doubt but in time to come, whether I live or die, your Majesty shall perceive mine intent is grounded upon a true love towards you, whose royal estate I beseech Almighty God long to continue, which is and shall be my daily prayer, according to my duty. And after pardon craved of your Majesty, for these rude and bold letters, if neither at my humble suit, nor for regard of the promise made to the Emperor, your Highness will suffer and bear with me as you have done, till your Majesty may be a judge herein yourself, and right understand their proceedings (of which your goodness yet I despair not) otherwise rather than offend God and my conscience, I offer my body at your will, and death shall be more welcome than life with a troubled conscience.

“Most humbly beseeching your Majesty to pardon my slowness in answering your letters, for my old disease would not suffer me to write any sooner. And thus I pray Almighty God to keep your Majesty in all virtue and honour, with good health and long life to his pleasure.

“From my poor house at Copped Hall, the xix of August.

“Your Majesty’s most humble sister,

The Princess Mary was able to outlast the rule of Edward Seymour, the Duke of Somerset, who was executed at the end of 1551. She was stronger against her half-brother Edward on the matter of attending the Holy Mass than she had been against her father on the matter of signing a document acknowledging Henry VIII's supremacy over the Church, her parents' invalid marriage, and her own illegitimacy in June of 1536. The Duke of Norfolk had, however, threatened to "beat her and knock her head so violently against the wall, that they would make it as soft as baked apples". Dealing with her powerful father was different than responding to her half-brother, who was still a minor, his reign administered by councilors and the protector, Somerset.

The National Archives has posted images of the report of those sent to confront Mary at Copped Hall in Essex (previously the property of Walsham Abbey) after she wrote the letter. She told them she would rather die than replace the Holy Mass with services from the Book of Common Prayer!

According to the Catholic Encyclopedia, Mary Jean Stone or Jean Mary Stone was:

Born at Brighton, Sussex, in 1853; died at Battle, Sussex, 3 May, 1908. She was educated at a Calvinist school in Paris and at Aschaffenburg in Germany, where she acquired an intimate knowledge of French, German, and Italian. In Germany Miss Stone was brought into touch with the Catholic religion, and exchanged Protestantism for the "free atmosphere", as she expressed it, of the Catholic Church. She was received into the Church by Monsignor Ketteler, then Bishop of Mainz. Her historical studies, for which, perhaps, she is best known to the public, were, on her return to England, encouraged by the fathers of the Society of Jesus. Her talent and painstaking method of research earned for her a speedy recognition in her "Mary the First, Queen of England" (1901). This is a study of the unhappy queen which takes first rank amongst historical monographs. Miss Stone also wrote "Faithful unto Death", a study of the martyrs of the Order of St. Francis during the Reformation period (1892); "Eleanor Leslie", a memoir of a notable Scottish convert to the Church (1898); "Reformation and Renaissance", a group of studies on the periods indicated (1904); "Studies from Court and Cloister", reprinted essays, of which perhaps the most interesting are those on "Margaret Tudor", "Sir Henry Bedingfeld", and a "Missing Page from the Idylls of the King" (1905); "The Church in English History", a higher textbook for teachers of history (1907). Her "Cardinal Pole", begun for the St. Nicholas Series, was interrupted by her death. She was a frequent contributor to the greater periodicals, the "Dublin Review", "Month", "Blackwood's", "Cornhill", etc., and contributed several articles to THE CATHOLIC ENCYCLOPEDIA.
Posted by Stephanie A. Mann at 12:30 AM