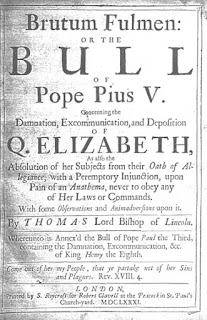 Dom Bede Camm wrote about the first group of Catholic martyrs of the English Reformation beatified by Pope Leo XIII. He discussed the offenses of four of the early Elizabethan martyrs (John Felton, John Storey, Father Thomas Woodhouse, and Thomas Percy, the Earl of Northumberland), noting that each of them had offended Elizabeth I in connection with her temporal power:

Coming now to Felton, Storey, Woodhouse, Percy, whose deaths were connected in one way or another with the Rising or the excommunication, we see that their causes involve many more problems than the lives of the other martyrs do. One might, for instance, discuss their patriotism in so far as they championed the old order, which was being subverted by a monstrous exercise of royal tyranny. One might draw out parallels between them and others, such as Hampden, who are commonly belauded as champions of popular resistance to the encroachments of the Crown, and the comparison would be greatly in favour of the Catholics. But here we are only concerned with the precise question of their martyrdom. Were they executed out of the motive of hatred of the Faith? Were they persecuted for professing the Faith, or for performing some act intimately connected with that profession ? On these points, too, this group of martyrs is somewhat exceptional.

For, whereas all the other martyrs were conspicuous for their inoffensiveness, these four had annoyed the Queen or opposed her titles or temporal claims. If we take a partial view of their cases, and fix our eyes exclusively on their abnormal features, we may feel a doubt about their claim to the honours of martyrdom. But it is needless to say that such a way of looking at them would not only be quite unfair, it would misrepresent the facts. We cannot arrive at the truth without considering the cases in their surroundings ; we must consider these executions as parts of a cruel persecution?

In Felton's case, if we regard nothing but the fact of his having set up the Bull of Deposition, we might remain uncertain about his claim to martyrdom. It is not everyone who meets his death while executing the sentences of an ecclesiastical court who is a martyr, for such sentences may and do provoke many passions besides hatred of the Faith. Even Catholic princes who would on no account have tampered with the faith or discipline of the Church, have been known to execute Papal messengers who brought them notice of excommunication, and yet no one pretends that such messengers deserve to be canonized as martyrs. But if we enlarge our view, and regard the whole of the circumstances of Felton's case, we at once see how different his was from that just described. He was not executed by a Catholic unwilling to tamper with the liberties of the Church, but by a persecutor of the Church eager to extinguish every single one of its liberties. Nor did either side regard the exercise of Papal authority in question as an issue unconnected with the continuance of the old Faith in this country. It seemed to be the only remedy in that desperate struggle. Felton took what seemed the last chance "to secure that the Pope's Apostolic voice should be heard, and his Apostolic judgment made known among his English flock. Death endured for that cause was true martyrdom."

As the Dictionary of National Biography describes him, Felton was a

catholic (sic) layman, [and] was descended from an ancient family in Norfolk. He was a gentleman of large property, and resided at Bermondsey Abbey, near Southwark, Surrey. His wife had been maid of honour to Queen Mary, who just before her death recommended her to Queen Elizabeth. Indeed, Elizabeth held her in great respect, for they had been friends and companions in childhood, and on this account Mrs. Felton was favoured with a special grant to keep a priest in her house. When Pius V published the bull of excommunication and deprivation against Elizabeth, Felton obtained copies of it from the Spanish ambassador's chaplain, who immediately left the kingdom. Felton published the bull in this country by affixing a copy to the gates of the Bishop of London's palace between two and three o'clock of the morning of 15 May 1570. The government, surprised at and alarmed by this daring deed, at once ordered a general search to be made in all suspected places, and another copy of the bull was discovered in the chambers of a student of Lincoln's Inn, who confessed, when put to the rack, that he had received it from Felton. The next day the lord mayor, the lord chief justice, and the two sheriffs of London, with five hundred halberdiers, surrounded Bermondsey Abbey early in the morning. Felton, guessing their errand, opened the doors and gave himself into their custody, frankly admitting that he had set up the bull. He was conveyed to the Tower, where he was placed on the rack, but he resolutely refused to make any further confession.

Felton was low of stature, and of a black complexion; naturally of a warm temper, and almost ungovernable where the interest of his religion was concerned. His plate and jewels, valued at 33,000 pounds, were seized for the queen's use. He was beatified by decree of Pope Leo XIII, dated 29 Dec. 1886.
Posted by Stephanie A. Mann at 12:30 AM