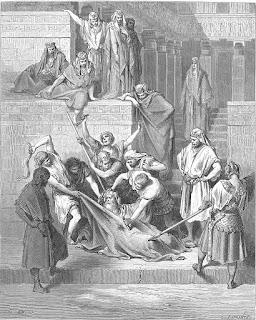 In the Orthodox Church and on the calendars of the Extraordinary Form of the Latin Rite AND of the Eastern or Byzantine Catholic Rite, today is the feast of the Holy Maccabean Martyrs, the prophet St. Eleazar, the mother (Solomonia) and her seven sons (Abim, Antonius, Gurias, Eleazar, Eusebonus, Alimus and Marcellus) who were tortured and killed because they would not eat pig flesh, violating Jewish law, when the Syrian King Antiochus Epiphanes ordered them to. Their stories are told in the second book of Maccabees 6:18–7:42.

Their resistance and heroism were remembered on the Catholic calendar because they are models of obedience to God's law rather than the civil law. At least one English Catholic martyr, Blessed John Slade, invoked the Holy Maccabean martyrs during his trial for recusancy, refusing to acknowledge Elizabeth I as the Governor of the Christian Church in England. 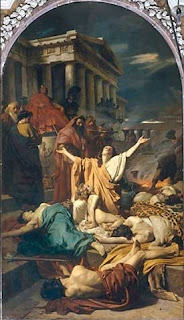 Abbot Gueranger wrote about the mother and her sons in The Liturgical Year:

The Holy Ghost, who would Himself hand down to posterity the acts of the protomartyr of the New Law, did the same with regard to the passion of Stephen's glorious predecessors in the ages of expectation. Indeed, it was he who then, as under the law of love, inspired with both words and courage these valiant brothers, and their still more admirable mother, who, seeing her seven sons one after the other suffering the most horrible tortures, uttered nothing but burning exhortations to die. Surrounded by their mutilated bodies, she mocked the tyrant who, in false pity, wished her to persuade at least the youngest to save his life; she bent over the last child of her tender love and said to him: My son, have pity upon me, that bore thee nine months in my womb, and gave thee suck three years, and nourished thee, and brought thee up unto this age. I beseech thee, my son, look upon Heaven and earth, and all that is in them: and consider that God made them out of nothing and mankind also: so thou shalt not fear this tormentor, receive death, that in that mercy I may receive thee again with thy brethren (2 Mach. 7:27, 28, 29). And the intrepid youth ran in his innocence to the tortures; and the incomparable mother followed her sons.

The Breviary Lesson is taken from a sermon of St. Gregory Nazianzen:

What [shall I say] of the Maccabees? For this festal day is celebrated in their name by this present congregation. Although by many they are not held in honor, because they did not enter on the conflict after Christ, yet they are worthy to be honored by all, because they showed courage and constancy in defense of the laws and institutions of their fathers. For if they suffered martyrdom before the Passion of Christ, what would they have done, if they had suffered persecution after Christ, and if they had had, as a model to be imitated, His death, which He accepted for our salvation? For, if they showed such and so great a courage, when they had no example before them, would they not have been even more courageous in the battle, if they had had that example before their eyes? There is even a certain mystical and hidden reason, which seems highly probable to me, and to all who love God, that none of those who suffered martyrdom before the coming of Christ could have attained to it without faith in Christ.

EWTN provides this information about other Old Testament figures remembered on the Eastern Catholic calendar (from ZENIT in 2007):

After our reply on invoking Old Testament saints (Oct. 30) several readers suggested that I had given insufficient consideration to the fact that almost all the Eastern Catholic Churches do have specific feast days for Old Testament figures.The objection is valid, although some such oversights are almost inevitable, as a result of the relatively brief extension of our replies as well as of our incomplete knowledge of the Eastern liturgies. This goes to show that we often learn more from our readers than we manage to impart.Among the celebrations readers mentioned were some saints of the Melkite (Greek or Byzantine Catholic) calendar. A reader cites "Malachi, Jan. 3; Zechariah, Feb. 8; Job, May 6; Amos, June 15; Ezekiel, July 23; Eleazar, the Seven Holy Maccabees, their mother Salome, Aug. 1; Joshua and Moses, Sept. 1 and 4; Hosea, Oct. 17; Daniel and the Three Holy Youths, Dec. 17."Many of the other holy ones celebrated are grouped toward the last four months of the year. Also, the reader notes: "The Sunday between Dec. 11 and 17 commemorates the holy ancestors of Christ, and the Sunday between Dec. 18 and 24 commemorates all the Old Testament saints from Abraham to Joseph, the husband of Mary."Besides St. Joseph, both the Latin and Eastern calendars celebrate some saints who are on the frontier between the Old and New Testaments. These include Joachim and Anna, Simeon and the prophetess Anna, Zechariah and Elizabeth, and St. John the Baptist.

Although the Maccabean martyrs are not on the current Roman Rite liturgical calendar, they are still worthy of our devotion and, God help us, of our imitation!
Posted by Stephanie A. Mann at 12:30 AM