From Lizst to the Carmelites in Kensington: Father Hermann Cohen 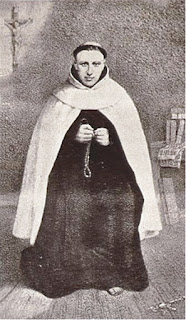 Blessed Dominic Barberi, whom we celebrated earlier this week, was not the only nineteenth century missionary sent to England to help bring converts to the Church. David Oldroyd-Bolt writes in The Catholic Herald about Hermann Cohen, "Jewish child prodigy of the piano and gambling addict turned champion of the Eucharist and promoter of nocturnal Adoration of the Blessed Sacrament." He was convert to Catholicism because of the Real Presence of Jesus in the Blessed Sacrament at Benediction and Holy Mass:

It was while taking time to discern his vocation that Cohen popularised the practice of nocturnal devotions to the exposed Blessed Sacrament. Having taken advice from several priests Cohen decided to become a Discalced Carmelite. He served his novitiate at the convent of Le Broussey, near Bordeaux, receiving the habit on October 6, 1849 (the feast of the Holy Rosary) and making his religious profession on October 7, 1850.

Cohen, now Fr Augustin-Marie du Très Saint Sacrament, then spent a decade preaching around western Europe, often to crowds of thousands. Liszt and Cohen were reconciled in 1862 during a visit to Rome and remained close thereafter. At Cardinal Wiseman’s request, Pope Pius IX sent Fr Cohen “to convert England, as one of my predecessors sent the monk Augustine”. On October 15, 1863 he, along with several French Carmelites, moved into a house in Kensington. That year, for the first time since the Reformation, an English novice took the habit.

During the Franco-Prussian War, Fr Augustin-Marie went to Spandau prison to minister to the 5,000 French soldiers being held there. Smallpox was rife, and it was while administering Extreme Unction without a spatula to two men that he himself caught the disease. On January 19, 1871, he made his last Confession, received Holy Communion and said his last words: “Now, O my God, I place my soul into Your hands.” He died peacefully the next day.

Fr Cohen’s Cause for beatification was put forward on January 19, 2016 by Archbishop Jean-Pierre Ricard of Bordeaux and Bazas. 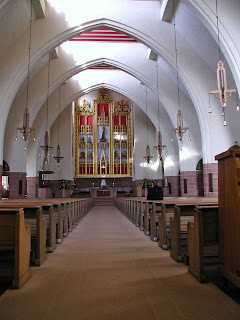 In researching this Carmelite foundation in Kensington, I realized that this was the Carmelite church we attended every day for Mass when Mark and I visited London with Monsignor William Carr from May 7 to 14, 2003, Our Lady of Mount Carmel and St. Simon Stock. What a providential coincidence:

Cardinal Wiseman asked Fr Hermann Cohen, a former professional musician, protégé of Liszt and convert from Judaism, to found a Carmelite monastery in London. In 1862, Fr Hermann came to London and temporarily based himself with the Sisters of the Assumption in Kensington Square. In 1863 he rented a large house in Kensington Church Street with extensive grounds to the south which later became the site of the church. A disused school was converted for use as a chapel. In 1864, the property was bought for £3,500. In July 1865 the construction of a permanent church began, from designs by E. W. Pugin. Built predominantly in the Early English style, the church opened on 16 July 1866. In 1875–76, the community also bought the copyhold of the remaining land along the north side of Duke’s Lane for approximately £4,600 and built there the priory, from designs by Goldie, Child & Goldie (1886–89, photo top right).

During the Second World War, Pugin’s church was severely damaged. A new church was built from designs by Sir Giles Scott, Son & Partners, who had been appointed in 1954.

Monsignor Carr, who concelebrated our wedding Mass on April 6, 1991, concelebrated Mass every weekday at Our Lady of Mount Carmel and St. Simon Stock, always proclaiming the Gospel. For Sunday Mass during that visit Mark and I went to the Brompton Oratory because the Oratorians would not, according to the Carmelites, allow Monsignor Carr to concelebrate Mass. He wanted to experience the choir at the Oratory and of course to revel in the connection to Cardinal Newman!
Posted by Stephanie A. Mann at 12:30 AM