Requiem Mass and Burial of Anne of Cleves 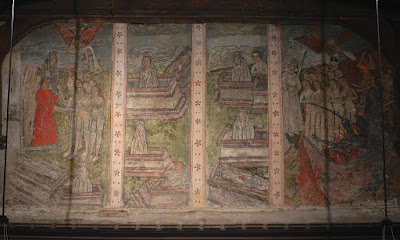 Anne of Cleves, Henry VIII's fourth wife, died on July 16, 1557 during the reign of Mary I. On August 4 she was buried in Westminster Abbey, according to Catholic ritual. As Tracy Borman argues in this History Today article, she may have been the most successful of Henry's wives: she survived him and lived happily ever after. Anne accepted the annulment settlement Henry granted her, acceded to his wishes, and ended up with land and comfort. After Henry's marriage to Catherine Howard ended with her beheading, Anne might have married Henry again:

Speculation began at once about who would be the king’s next wife. Among the potential candidates was Anne of Cleves. She had been careful to remain on good terms with Henry after their annulment, and had shown no signs of resentment at being so humiliatingly rejected. She had been a regular visitor to court and had also received several visits from her former husband, which by all accounts had been very convivial. The pair had exchanged New Year’s gifts in 1542. But the king made no indication of wishing to revive their union, and although Anne was rumoured to be bitterly disappointed when he married his sixth and final wife, Katherine Parr, this may have been just for show.

By that time, Anne was comfortably ensconced at Hever with all the riches and honours of being a queen, but none of the disadvantages of being married to the ageing, bloated and increasingly tyrannical king. She remained there for the rest of her days, outliving her estranged husband, who died in 1547 and was succeeded by Edward, his nine-year-old son.

She avoided Court during Edward VI's reign but soon returned when Mary succeeded:

The archetypal ‘merry widow’ (or divorcee), Anne also outlived Henry’s son, Edward, who died after just six years on the throne. He was succeeded by his elder half-sister Mary, with whom Anne was still on good terms. She and Elizabeth were accorded the place of honour at Mary’s lavish coronation. The two women shared an open chariot which was richly arrayed with crimson velvet and “cloth of silver”. Anne and her younger stepdaughter were also given new dresses made from a similarly rich silver material, and in the procession to Westminster Abbey they walked together directly behind the new queen.

But neither Anne nor Elizabeth would long enjoy Mary’s favour. Their reformist religious views set them at odds with the new conservative Catholic regime, and there were soon rumours that the two women were conspiring against the queen. These were almost certainly untrue: Anne was far too sensible to take such a risk and had no grudge against Mary. Fortunately, Mary retained enough of her former affection for Anne not to act against her.

With characteristic discretion, Anne left court soon after Mary’s accession, resolved to live out her days quietly at Hever and Chelsea – another manor left to her by Henry. It was while staying at the latter that Anne died on 16 July 1557, after a short illness. Although she was only 41 years of age, she had outlived each of Henry VIII’s five other wives – and had had a happier ending than any of them.

Borman's comments about Anne's "reformist religious views" are confusing, since she was buried, according to Westminster Abbey, with Catholic Rites as "Anne had wanted". If she was a Protestant, she would not have wanted a Catholic Requiem Funeral Mass, which was sung by the Abbot of Westminster, John Feckenham. Such a Mass would be replete with prayers for the dead, which a Protestant reformist would probably not have wanted, having rejected the doctrine of Purgatorial perfecting before Heaven. Nancy Bilyeau notes that Anne indeed wanted to be buried with “the suffrages of the holy church according to the Catholic faith.” And the Tudor Times notes, Anne had been born and raised a Catholic (she conformed to Henry's wishes to become an Anglican and returned to the Catholic Church at Mary's request):

During Anne’s early childhood, a large part of the empire, roughly correspondingly to Germany, was convulsed by the religious upheaval instigated by the Augustinian monk, Martin Luther, followed by the hugely destructive Peasants’ War. This tumult led to many of the northern Imperial states seeking to reduce, or even throw off altogether, the control of the Empire in secular matters, and the Roman Catholic hierarchy in religious matters.

In Cleves, Anne’s father did not join the Lutheran party overtly, and Anne was brought up as a Catholic (contrary to what is often supposed). Duke John sought reform of the Church within his territories, but he looked to Erasmus rather than Luther for guidance. Duchess Maria was far less interested in ecclesiastical reform than her husband.

Therefore, the term "reformist religious views" would have to be carefully defined. Many Catholics wanted the Church to be reformed and made more faithful and holy--that doesn't mean they rejected certain Catholic doctrine, worship and devotion or that they became Lutherans. Whether or not Erasmus laid the egg that Luther hatched, Erasmus remained a Catholic.

One more note about her Catholic funeral: the Princess Elizabeth, later Queen Elizabeth I, was the chief mourner, remaining with Anne's body in state in the Choir of Westminster Abbey, listening to Abbot Feckenham's Catholic sermon on the Psalms, and attending the Requiem, hearing the prayers for Anne and the chant of Dies Irae:

The monks of the Benedictine Abbey would have prayed for Anne as she and Mary wished through the ages. But when Mary died and Elizabeth came to the throne, Elizabeth would reject Abbot Feckenham's ceremonial greeting, suppress Westminster Abbey, and place the Abbot under arrest. Her religious settlement, in the Thirty-Nine Articles, would again reject prayers for the dead and the doctrine of Purgatory.