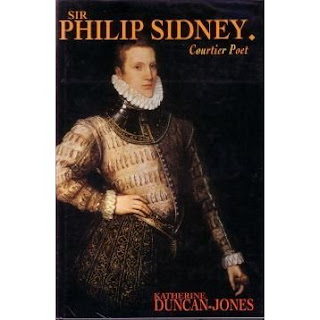 Sir Philip Sidney, courtier, diplomat, poet, and soldier, is known as the great champion of Elizabethan, Protestant England. But he had connections to someone who would become the most hunted man in England, Edmund Campion.

As this biography of Campion notes, Sidney met with Campion when visiting Prague, while the latter was studying for the priesthood in April, 1577:

Meanwhile Rudolph II had succeeded to the imperial throne; and the “magnificently provided” Envoy who was sent to[67] Prague, bearing the congratulations of Queen Elizabeth, was none other than Sir Philip Sidney. Sidney’s mind was set upon seeing his old friend Campion, and talking with him; but he managed only with difficulty to carry out his wishes. He went officially in the Emperor’s train to hear his friend (not yet in priest’s orders) preach, and on his return to England unguardedly spoke with delight of the sermon. Whenever Sidney visited the Continent he was supposed to become tainted with a hankering after Catholicism, though in all his public actions he was conspicuously Protestant. Campion, who knew him from boyhood and was not given to misjudgment, believed that he had almost won over the star of English chivalry: “this young man so wonderfully beloved and admired,” he calls him in 1576; a testimony doubly interesting, when we remember that Philip Sidney was then but three-and-twenty, to the effect which his short life made upon all his contemporaries. “He had much conversation with me,” Campion’s letter goes on, “and I hope not in vain, for to all appearances[68] he was most keen about it. I commend him to your remembrances at Mass, since he asked the prayers of all good men, and at the same time put into my hands alms to be distributed to the poor for him; this trust I have discharged.” He ends by hoping that some of the missionaries then going back to England from Douay will have “opportunity of watering this plant . . . poor wavering soul!” Fr. Parsons in his Life of Campion tells us that Sidney “professed himself convinced, but said that it was necessary for him to hold on the course which he had hitherto followed.” Such was the sad answer of Felix to St. Paul.

Sidney and Campion had met before, of course, since Sidney had accompanied Elizabeth to Oxford when Campion had made his great impression on the queen and had earned the patronage of Sidney's uncle, Robert Dudley, the Earl of Leicester. Sidney had also studied at Oxford while Campion was a Fellow at St. John's and Proctor. Edmund Campion had served in Sidney's father's household in Ireland, where Sir Henry Sidney served as Elizabeth's Lord Deputy. Campion wrote his History of Ireland while in Sidney's service and had dedicated it to Leicester.

Katherine Duncan-Jones, a Somerville College Shakespeare Scholar, wrote a biography of Sidney in 1991 that Blair Worden appreciated in the London Review of Books (subscription required) in a review essay about Philip and Algernon Sidney:

Katherine Duncan-Jones’s Sir Philip Sidney: Courtier Poet is the first major biography of its subject since 1915. Rarely is a scholarly book so spirited, or a spirited book so scholarly. Duncan-Jones’s learning, always profound and never advertised, is communicated with elegance and lightness of touch. She aims ‘not to debunk’ Sidney but to ‘summon him to life, spots and all’. Like so many of his family – not least Algernon – Philip had a querulous, at times violent character. He could also be a prig and a snob. And he could be deeply devious, a characteristic ruefully observed by a victim of it who remarked that Sidney had been bred up ‘at a bad school’, the school of the unscrupulous Leicester. On the credit side are his undoubted charm and affability and the breadth and discernment of his artistic and literary patronage. There is also a bottomless generosity, although here Duncan-Jones seems less clear-eyed than usual. He was indeed wonderfully generous, but with whose money? His mentor Hubert Languet apparently ate into his lifesavings to assist Philip’s gift-giving. On his deathbed Philip willed away endless possessions, and left Sir Francis Walsingham, his father-in-law and executor, to sink beneath the burden of Philip’s debts. . . .

Sidney’s religious beliefs interest Duncan-Jones more than his political ones. They nonetheless remain elusive. Her principal contribution is to emphasise his contacts and friendships with Roman Catholics, which appear to contradict the conventional picture of zealous Protestantism. Much is made of his ties with Edmund Campion, who hoped for Sidney’s conversion. I suspect that Sidney followed Leicester’s example and sought a power base across the religious boundaries even as he backed the party of forward Protestantism. Both in his life and in his art Duncan-Jones detects a growing religious intensity in the final years of Sidney’s life. When he went to the Netherlands the intensity acquired an apocalyptic strain, which seems to sit oddly beside his doctrinally liberal Platonism. How little we sometimes understand the theological equipment of the political thinkers of Early Modern England. The same puzzling combination would appear a century later, with so many of Philip’s characteristics, in his great-nephew Algernon.

Duncan-Jones also contributed an essay on Campion and Sidney to a collection edited by Thomas M. McCoog, SJ, The Reckoned Expense: Edmund Campion and the Early English Jesuits.
Posted by Stephanie A. Mann at 12:30 AM