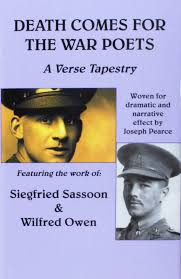 Things have been hectic lately and I haven't mentioned two events I attended in the past two months: The Eighth Day Institute Inklings Oktoberfest in October and the Spiritual Life Fall Forum just concluded this month. These events had in common the keynote speaker: author and editor Joseph Pearce.

At the Inklings Oktoberfest his lectures were focused on World War I, since we are still remembering the centenary of the War to End All Wars. Pearce offered three lectures: one on the great poets of World War I, including Sassoon and Owen as featured in one of Pearce's most recent books, Death Comes for The War Poets, and one each on the wartime experiences of Tolkien and Lewis. Here's an excerpt from an essay Pearce submitted for the EDI blog:

It would have been very easy for Tolkien and Lewis to have become embittered by their experience of the trenches in the first world war. Both men lost close friends in the war, and both men experienced horrors that would be difficult for most of us to even imagine. And yet they emerged from their world on fire with imaginations that would set the world ablaze with the flame of divine light and love. Tolkien began working in earnest on the invention of his elvish language in 1915 and 1916, only months before the “animal horror” of the Somme, and this would serve as the inspirational launching pad for the creation of Middle-earth in which his world-changing stories are set. Meanwhile, C. S. Lewis discovered the works of G. K. Chesterton in early 1918, while serving in the British Army and recovering from trench fever, an encounter that would set his soul on the road to recovery. Reading Chesterton helped baptize Lewis’s imagination, contributing to his transition from cynical atheism to Christian conversion. And so it was that Lewis and Tolkien received priceless inklings of light amid the darkness of war. From the very ashes of the World on Fire these great writers would enkindle the power and the glory of the Word on Fire!

Another poet whom Pearce featured in his first lecture was the American Joyce Kilmer, most famous for "Trees". Pearce recited this poem,"Prayer of a Soldier in France":

My shoulders ache beneath my pack
(Lie easier, Cross, upon His back).

I march with feet that burn and smart
(Tread, Holy Feet, upon my heart).

Men shout at me who may not speak
(They scourged Thy back and smote Thy cheek).

I may not lift a hand to clear
My eyes of salty drops that sear.

(Then shall my fickle soul forget
Thy agony of Bloody Sweat?)

My rifle hand is stiff and numb
(From Thy pierced palm red rivers come).

Lord, Thou didst suffer more for me
Than all the hosts of land and sea.

So let me render back again
This millionth of Thy gift. Amen.

The Oktoberfest was combined with the celebration of the 29th anniversary of the opening of Eighth Day Books, and there was a fun reception at the store after the Friday night lecture. Pearce will be returning to Wichita in late January 2018 for the Eighth Institute's Eighth Annual Symposium titled "STRANGERS & SOCIETY: Cultivating Friendship in a Fractured Age". Mr. Pearce came back to Wichita this past weekend for the Spiritual Life Center's first Fall Forum, focused on Catholic liturgy,  “Memory & Mystery: Perspectives on the Sacred Liturgy”, at which he gave two lectures: “The Liturgy and the Second Spring” and “The Death & Resurrection of the Mass: Modernism versus Tradition”. In the first lecture he addressed the efforts of Joseph Cardinal Ratzinger/Pope Benedict XVI to reform the reform of the liturgy after the Second Vatican Council, restoring reverence, silence, and Latin to the celebration of the Mass. Pearce used Blessed John Henry Newman's great homily from the Westminster Diocesan Synod in 1852, "The Second Spring" as his inspiration and also quoted extensively from Ratzinger's The Spirit of the Liturgy. Eighth Day Books provided a book table at the forum and Mr. Pearce was busy signing copies of his books.

He and I had some opportunities to discuss submissions I've made previously to the St. Austin Review and another journal he is editing, so I'll have more announcements about those publications soon.

By the way, Joseph Pearce will be back in Kansas early in 2018 for the Third Annual Prairie Troubadour Symposium in February: "Field and Family: Reflections on a Healthy Human Ecology"! That's held in Fort Scott.
Posted by Stephanie A. Mann at 12:30 AM