Professor Brad Gregory on Luther as a "Rebel in the Ranks" 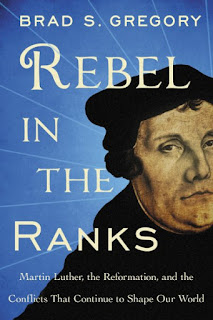 The National Catholic Register asked me to interview Professor Brad S. Gregory for their "Reformation" issue, published on October 29 in print and on October 31, the 500th anniversary of the beginning of the Protestant Reformation. Please see the interview here on-line. The first question I asked is:

What are we really celebrating or commemorating this year? The beginning of the Protestant Reformation or Martin Luther’s posting of the “95 Theses”?

And his answer was:

By convention — and not without reason — Luther’s “95 Theses” are also considered the beginning of the Protestant Reformation. They initiated an unexpected series of events that led to Luther’s defiance of and condemnation by Pope Leo X in early 1521.

The really important “posting” of the “95 Theses,” incidentally, wasn’t Luther’s affixing them to the door of the Castle Church in Wittenberg, an event not mentioned until decades later, and that didn’t attain iconic-moment status until the 19th century, and which might not even have happened. The important posting was that, after writing his theses, Luther sent them to Archbishop Albrecht of Mainz, the most powerful Churchman in Germany, who sent them on, in turn, to Rome. That started things in motion at the highest levels of the Church, and the multiple printings of the “95 Theses” by the end of 1517 were the beginning of Luther’s emergence as a public figure.

I highly recommend his book on the Catholic, Protestant, and Anabaptist martyrs of the Reformation Era, Salvation at Stake, and his controversial and intriguing The Unintended Reformation. He continues to examine the issues discussed in that book in his most recent publication: Rebel in the Ranks: Martin Luther, the Reformation, and the Conflicts That Continue to Shape Our World.
Posted by Stephanie A. Mann at 12:30 AM