How the French Never Quite Colonized Arkansas 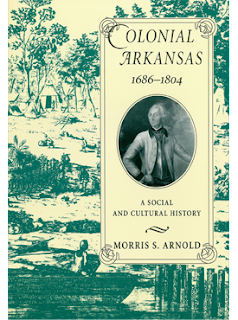 Last year I read this author's study of how different legal systems and codes were administrated in Colonial Arkansas under the French, the Spanish, and during the transition to the United States after the Louisiana Purchase. This book is more comprehensive in its coverage of the colonial era in Arkansas. We are staying far from the location of the Arkansas Post which was always near the Mississippi, but it is still fascinating to read about how the French started moving south from their original settlements near the Saint Lawrence River.

They never quite got the Arkansas Post established and the Jesuits who served there particularly never had the facilities or the time and stability to make any great progress in either serving the settlers or converting the nearby natives, the Quapaw. The Quapaw were good allies of the French, however, because they saw the Chicksaws as common enemies. The settlers at the Arkansas Post were often trappers and hunters; the farmers struggled because of flooding; attacks by the Chickasaws and other tribes caused losses among the military and the settlers, including women and children taken as prisoners.

Arnold is at his best as a writer when discussing law enforcement and administration. He provides fascinating detail, for example, about the differences between notaries public in the U.S.A. today and on the Continent in the colonial era. As a former notary public at a corporation I am familiar with the process of apostille and consulate authentication, often required by foreign governments because they don't recognized the limited authority of the notary public. Arnold points out that notaries in Louisiana have greater legal authority than in the other 49 states.

He does not, however, provide much background on the government representatives mentioned through the years but the book is well illustrated with portraits of them, maps, and other pictures and drawings. Some of the portraits depict men and women of great nobility and personality.
Posted by Stephanie A. Mann at 12:30 AM