Speaking of the Second Spring 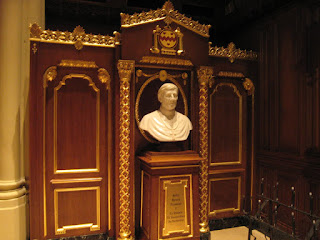 Joseph Pearce highlighted Blessed John Henry Newman's 1852 sermon "The Second Spring" in his first lecture at the the Fall Forum last weekend. He cited this passage:

A great change, an awful contrast, between the time-honoured Church of St. Augustine and St. Thomas, and the poor remnant of their children in the beginning of the nineteenth century! It was a miracle, I might say, to have pulled down that lordly power; but there was a greater and a truer one in store. No one could have prophesied its fall, but still less would any one have ventured to prophesy its rise again. The fall was wonderful; still after all it was in the order of nature;—all things come to nought: its rise again would be a different sort of wonder, for it is in the order of grace,—and who can hope for miracles, and such a miracle as this? Has the whole course of history a like to show? I must speak cautiously and according to my knowledge, but I recollect no parallel to it. Augustine, indeed, came to the same island to which the early missionaries had come already; but they came to Britons, and he to Saxons. The Arian Goths and Lombards, too, cast off their heresy in St. Augustine's age, and joined the Church; but they had never fallen away from her. The inspired word seems to imply the almost impossibility of such a grace as the renovation of those who have crucified to themselves again, and trodden under foot, the Son of God. Who then could have dared to hope that, out of so sacrilegious a nation as this is, a people would have been formed again unto their Saviour? What signs did it show that it was to be singled out from among the nations? Had it been prophesied some fifty years ago, would not the very notion have seemed preposterous and wild?

Henry VIII biographer J.J. Scarisbrick (Dr. James Scarisbrick) proposes that England needs a Third Spring of Catholicism in The Catholic World Report--and not just a literary revival, but a moral, spiritual, and cultural revival to fill the gap of religion in England:

The overall collapse of the Anglican Church and the near-disappearance of Methodism and the other non-Conformists from the national religious scene in recent times have left a huge spiritual vacuum at the heart of English society. Ours is indeed a post-Christian one. An increasingly arrogant neo-paganism is engulfing us.

This is lamentable. But is it not also a God-given opportunity for the English Catholic community to come out of its post-Vatican II diffidence, deference, introversion (call it what you like) and resume what our forefathers began again in 1850: that is, to reclaim our beloved country for the true Church?

Famously, in 1852 John Henry Newman, preaching at a celebration of that restoration of our Hierarchy, spoke of a ‘Second Spring’. This yielded a rich harvest. But now we need a third.

How will this come about?

It will be the apostolate of every Catholic priest, deacon, lay woman and man. We all have to take up this challenge.

Above all it will be the responsibility of our bishops. Hitherto unseen and unheard by the outside world, they have to come out from the sidelines – to become the nation’s spiritual leaders, heirs to the likes of Anselm, Becket, and John Fisher.

They must proclaim the good news that God loves us and longs for us to love him; that his Son has re-opened the gates of Heaven for and we can all pass through them if we want to; that the seven sacraments have been given to us to enable us to do so.
The same is true of the USA and every nation where Catholics live. We have Good News to tell and we should tell it!