It's time again to prepare for my every-other week discussion of Hilaire Belloc's Characters of the Reformation with Anna Mitchell on the Son Rise Morning Show. Tomorrow morning after the 7:45 a.m.Eastern time traffic check (6:45 a.m. Central) we will talk about Belloc's views of Pope Clement VII and Thomas Cranmer. 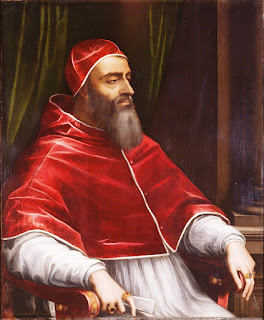 Clement VII was the Pope of King Henry VIII's divorce. He was reigning over the whole space of that affair, being appointed before the King of England had any intention of getting rid of his wife, and dying after the English schism had been virtually completed and within a very short time of its final and formal completion by the Act of Supremacy. For Henry's idea of getting rid of his legitimate wife, Catherine of Aragon (which idea as we have seen was probably more Anne Boleyn's than his own), cannot have arisen, at the very earliest, before 1525. The first (not absolutely certain) documentary allusion to it is in 1526, and overt action only begins in 1527. Now Clement VII was elected to the Papal throne in 1523. . . . He is therefore the man in supreme authority during all the period of the divorce and of the schism.

Now the prime historical question which his reign arouses is this. Could the position have been saved? Could the Pope, by the exercise of certain virtues or certain intellectual qualities in a fashion different from that which he actually showed, have prevented the loss of England to the unity of the Faith? It is a question of the very first importance to the whole history of Europe for, as I am never tired of repeating, if England had not gone Christendom would still be united and all Europe would be Catholic to-day.

The answer to this question is not, I think, doubtful. Though Clement was guilty of great weakness and of tortuous policy, though he often sacrificed the spiritual to the temporal, yet he cannot be made responsible for the disaster. Nothing could have prevented the schism save the Pope's pronouncement in favour of a divorce, and that the Pope could not do without flying in the face of Christian law, of which he was the supreme guardian by the nature of his office.

Belloc's analysis of Pope Clement VII's character includes the fact that he was a Medici:

Julius de Medici was made Cardinal and was the right-hand man of his cousin Leo X during the reign. After the brief interval of that very fine reforming character Adrian VI (who, if he had lived, might well have reversed the current and re- united Europe), Julius de Medici was elected at the age of forty-five under the title of Clement VII.

He was a man of excellent morals, very great erudition, good manners, perfect refinement, if anything rather too much delicacy of mind and of taste, a splendid patron of the arts and a sure judge of excellence in them. He was also a remarkably hard worker, taking the tremendous duties of his office most seriously. Moreover he was as intelligent as any man in Europe. What he lacked was simplicity, also strength of initiative and power of direction. He lacked both those qualities which make for strong command through what may be called the "squareness" of a character, and those which make for successful command through the moral simplicity of a character. In the face of a difficult and involved position his policy became a tangle of secret and involved intrigues, and he had that fatal symptom of weakness which takes the form of always playing for time. There are, obviously, occasions when playing for time is wise, but Clement VII was one of those men who always play for time, and when they find a decision difficult, say to themselves that with sufficient delay anything may turn up in their favour, and who therefore create delay for its own sake. All his method, from the first mention of the desire for divorce expressed by the English Court up to the very last still hesitating and half tentative declarations against the actions of the English government, consisted in dependence on delay. For seven years he played delay as his only card.

Belloc opines that Clement's choice was to grant the annulment (the decree that Henry and Catherine's marriage had never occurred)--which he could not do with betraying his office--or to have stated absolutely and quickly that the marriage was valid and Henry was to remain with Catherine. Belloc notes that the latter choice would have led to the English Reformation just as surely as what Clement did, which was to delay and delay. In Belloc's opinion, Clement did the best he could--and he claims that Clement's final actions were more in support of Catherine of Aragon's standing as a devout Catholic and true wife than in fear of Charles V, the Holy Roman Emperor and Catherine's nephew. 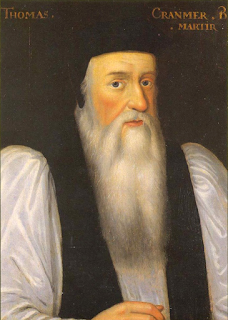 Belloc begins his chapter on Cranmer by comparing Cromwell and Cranmer, concluding:

Cromwell, by the scale of his intelligence, his under- standing of national and international affairs, his strength of will, tenacity of purpose, grasp of detail — all that marks a great statesman — was almost on the level of Bismarck or Richelieu. His extreme vileness and baseness, his brutality and gross cowardice at the end does not affect this judgment as to his capacity, which he put to such abominable uses.

But Cranmer showed little intelligence or foresight, was devoid of initiative, accepted through fear the various tasks thrust upon him, was always subservient, and by nature hypocritical and wavering. He did not want to be Chaplain to Anne Boleyn in particular, though no doubt he was glad of the income: he did not want to plead for Henry VIII at Rome: he certainly did not want to be made Archbishop; he took but a petty part in the spoiling of the Church and allowed his own diocese to be spoiled unmercifully.

After being the mere servant of Henry and ready to belie any conviction of his own at Henry's orders he became the servant of the tyrant Somerset after Henry's death, then the servant of the man who supplanted that tyrant, then it was he who pitifully attempted to save his life under Mary by the most abject denials and repudiation of all that he really had at heart.

There was one quality indeed about Cranmer which many have mistaken for greatness; and it is the one which we must linger upon, because error in this matter is so common, not only in his case but in a hundred others. Cranmer had great artistic power. He could frame a sentence of rhythmical and exquisitely beautiful English as no man has been able to do before or since. It is to him that the Anglican Church owes those prayers, "The English Prayerbook", the diction and language of which have given it its strong hold upon the national mind. The Litany of the English Church is his — a wonderful document as far as artistry is concerned; presumably most of the Collects, the translation of the Prefaces of the Mass incorporated into the English service, and many other Catholic prayers similarly incorporated.

His unique talent was not recognized in his lifetime; its effect upon men's minds came much later; the strong affection which the average Englishman feels for the Book of Common Prayer and its fine phrases dates, not from Cranmer's century but from the next. It is often the case with great artists in prose and verse; they need time to manifest their gifts and these are not apparent until long after they are dead.

But Belloc also warns us against thinking this makes Cranmer great:

Cranmer having such supreme talent, in this one line of writing exquisite prose, a modern habit of mind would make us confuse such talent with real greatness. And it is at this point that I beg the reader to pause and consider how false such an attitude is. Great artistic talent in any direction, as of a poet or a prose writer or a painter or a sculptor or anything else, is hardly inherent to the man; it comes and goes; it is often possessed only for a short phase in his life; it hardly ever colours his character as a whole and has nothing to do with  the moral and intellectual stuff of the mind and soul — by which alone men's intrinsic greatness can be measured. Many great artists, perhaps most great artists, have been poor fellows indeed, whom to know was to despise.

So it was with Cranmer, and it is further to be remarked that he was one of those artists who can only work in a very limited frame. He wrote great masses of stuff both in Latin and English, plenty of letters, disputations, reports and the rest, most of them turgid and none of them remarkable. He only produced this astonishing prose when he sat down to do it with great care, thinking about every word and concentrating upon the narrow task before him. And, as is always the case with this kind of talent, he only excelled in short passages. With all this it must be remembered that Cranmer stands at the origin of great English prose. He was not only the highest master of it but he was also the chief originator of it. By that alone has he any claims to fame.