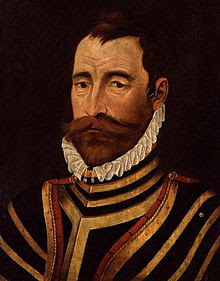 According to the Catholic Encyclopedia, Blessed Patrick O'Hely or O'Healy was:

Bishop of Mayo, Ireland; d. At Kilmallock, September, 1579. He was a native of Connaught, and joined the Franciscans at an early age. Four years after his profession he was sent to the University of Alcalá, where he surpassed his contemporaries in sacred studies. Summoned to Rome, he was promoted in 1576 to the See of Mayo, now merged in that of Tuam. Gregory XIII empowered him to officiate in adjoining dioceses, if no Catholic bishop were at hand, and supplied him generously with money. At Paris he took part in public disputations at the university, amazing his hearers by his mastery of patristic and controversial theology, as well as of Scotist philosophy. In autumn, 1579, he sailed from Brittany and arrived off the coast of Kerry after James Fitzmaurice had landed at Smerwick from Portugal with the remnant of Stukeley's expedition. All Munster was then in arms. The House of Desmond was divided, and the politic earl had withdrawn from the scene of action. The bishop and his companion, Conn O'Rourke, a Franciscan priest, son of Brian, Lord of Breifne, came ashore near Askeaton, and sought hospitality at the castle where, in the earl's absence, his countess entertained them. Next day they departed for Limerick; but the countess, probably so instructed, for the earl claimed the merit afterwards, gave information to the Mayor of Limerick, who three days later seized the two ecclesiastics and sent them to Kilmallock where Lord Justice Drury then was with an army. As president of Munster, Drury had recently perpetrated infamous barbarities. In one year he executed four hundred persons "by justice and martial law". Some he sentenced "by natural law, for that he found no law to try them by in the realm". At first he offered to secure O'Hely his see if he would acknowledge the royal supremacy and disclose his business. The bishop replied that he could not barter his faith for life or honours; his business was to do a bishop's part in advancing religion and saving souls. To questions about the plans of the pope and the King of Spain for invading Ireland he made no answer, and thereupon was delivered to torture. As he still remained silent, he and O'Rourke were sent to instant execution by martial law. The execution took place outside one of the gates of Kilmallock. 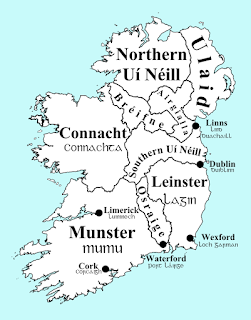 Conn O'Rourke or O'Ruairc, was indeed of high ranking Irish family from the Kingdom of Breifne, depicted on the map on the right. His ancestors had been kings and lords of Breifne for centuries.

Sir William Drury, pictured above, died later that year while still in Munster (October 13). More about him here.

During his homily that Sunday--he also beatified several religious founders--he spoke in English about the Irish Martyrs, which included the group known as the Wexford martyrs (names in bold above):

And how can we fail to sing the praises of the seventeen Irish Martyrs being beatified today? Dermot O’Hurley, Margaret Bermingham Ball, Francis Taylor and their fourteen companions were faithful witnesses who remained steadfast in their allegiance to Christ and his Church to the point of extreme hardship and the final sacrifice of their lives.

All sectors of God’s people are represented among these seventeen Servants of God: Bishops, priests both secular and religious, a religious brother and six lay people, including Margaret Bermingham Ball, a woman of extraordinary integrity who, together with the physical trials she had to endure, underwent the agony of being betrayed through the complicity of her own son.

We admire them for their personal courage. We thank them for the example of their fidelity in difficult circumstances, a fidelity which is more than an example: it is a heritage of the Irish people and a responsibility to be lived up to in every age.

In a decisive hour, a whole people chose to stand firmly by its covenant with God: “All the words which the Lord has spoken we will do”. Along with Saint Oliver Plunkett, the new Beati constitute but a small part of the host of Irish Martyrs of Penal Times. The religious and political turmoil through which these witnesses lived was marked by grave intolerance on every side. Their victory lay precisely in going to death with no hatred in their hearts. They lived and died for Love. Many of them publicly forgave all those who had contributed in any way to their martyrdom.

The Martyrs’ significance for today lies in the fact that their testimony shatters the vain claim to live one’s life or to build a model of society without an integral vision of our human destiny, without reference to our eternal calling, without transcendence. The Martyrs exhort succeeding generations of Irish men and women: “Fight the good fight of the faith; take hold of the eternal life to which you were called . . . keep the commandment unstained and free from reproach until the appearing of our Lord Jesus Christ”.

To the Martyrs’ intercession I commend the whole people of Ireland: their hopes and joys, their needs and difficulties. May everyone rejoice in the honour paid to these witnesses to the faith. God sustained them in their trials. He comforted them and granted them the crown of victory. May he also sustain those who work for reconciliation and peace in Ireland today!

There are many more Irish martyrs who have not been beatified or canonized. Like the cause of the martyrs of England and Wales, it was delayed by English supremacy in Ireland and fear of reprisal; also, many records have been lost. The cause of the Irish martyrs is described on the Catholic Saints website:

The collective title given to the 260 or more persons who are credited with dying for the faith in Ireland between 1537 and 1714.

Pope Benedict XV signed the Commission of Introduction for their beatification in March 1915. The long delay in the start of their Cause was occasioned by the scarcity of official records and by the evident reprisals which any such virtual declaration of the injustice of laws still in effect would naturally have brought from the English ascendancy. The latter objection was removed in 1829 by Catholic Emancipation; the former was gradually overcome as conscientious investigators published the results of their researches. A series of publications begun in 1861 by Dr Moran (then Vice-Rector of the Irish College, Rome, Italy, later cardinal, and Archbishop of Sydney) was followed in 1868 by a collection of memorials made with great discrimination by Major Myles O’Reilly; the labours of these two men greatly facilitated the task of investigation finally entrusted by the ecclesiastical authorities to Father Denis Murphy, SJ, whose materials were published in 1896, thus completing the work started in Portugal between 1588 and 1599 by Father John Houling, SJ. Either the records of the various martyrdoms during the reign of King Henry VIII were all destroyed, or it was too dangerous to attempt to keep them, and for that reason the evidence for this time is so scanty that only two names of martyrs belonging to this period have been submitted in the appeal for beatification. Neither have any names been submitted from the earliest narrative, i.e., the histories given to an Irish professor at the University of Alcala by an old Trinitarian friar, for discredit has been thrown on it because it was worked up by the fanciful Spanish writer Lopez.
Posted by Stephanie A. Mann at 12:30 AM