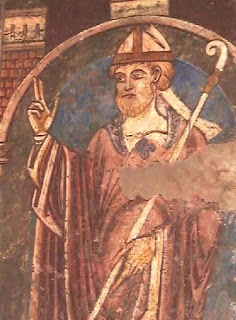 News from The Catholic Herald about a Catholic shrine in an Anglican Cathedral:

Relics of one of Britain’s earliest saints, St Cuthbert, have gone on display in Durham Cathedral.

The centrepiece of the permanent exhibition at the cathedral – which was built in his honour – is an oak coffin, made in Lindisfarne in AD 698, 11 years after Cuthbert’s death. Other exhibits include the saint’s pectoral cross – Cuthbert was called back from his hermit’s cell to become a bishop – and his ivory comb.

Cuthbert’s body and relics were carried by Lindisfarne’s monks when they fled inland to escape Viking raids. They eventually settled in Durham, which became a place of pilgrimage. Although his shrine was destroyed in the Reformation, his relics survived, and his remains were finally reburied in the cathedral in 1899.

The BBC notes that St. Cuthbert's shrine could help save the Cathedral:

Many cathedrals across the UK are suffering financial pressures with some facing closure.

Durham Cathedral's Very Reverend Andrew Tremlett said the £7.50 admission fee for the Treasures of St Cuthbert exhibition would "keep the cathedral open for everybody".

He said: "These things are different in different parts of the country. It depends on your visitor mix.

"We want to keep the cathedral there for the whole community, but also be able to balance the books."

More about the shrine at the Durham Cathedral website, including this detail about Cromwell's commissioners preparing to destroy the shrine:

He found Cuthbert “lying whole with his face bare and his beard as if it had a fortnight’s growth.”

The goldsmith shouted out “Alas, I have broken one of his legs”

Dr Henley called out “throw down the bones”

But the goldsmith replied that he could not do so because the bones were kept together by skin and tissue.

Dr Ley went to the feretory to see for himself, and then told Dr Henley in Latin:

“He was lying whole”

Dr Henley did not believe this and repeated “Cast down the bones,”

“If you do not believe me, come up and see for yourself,” Dr Ley said.

At which point Dr Henley came up and handled him and saw that he was indeed un-decayed.

The commissioners then ordered the monks to move the body to the vestry until the King decided what should be done.

Which just goes to show that some grave robbers have a conscience! Nevertheless, the commissioners knew what to do with the jewels and gold of the shrine.
Posted by Stephanie A. Mann at 12:30 AM