A Castle, A Priest, and A Poet 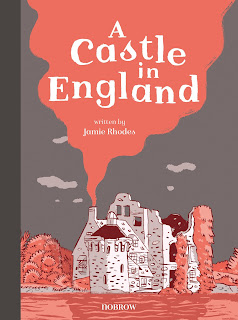 Scotney Castle in Kent is owned by the National Trust. This graphic novel offers chapters telling the story of the families that lived in the castle, including a recusant Catholic family. The second short story, "The Priest" tells how the Thomas Darrell family sheltered Father Richard Blount during the Elizabethan Era:

This period is known as the English Reformation. The monarchy was in radical transition, and the religion of the country with it; from Church of England under Henry VIII, the country became briefly Protestant under Edward VI, Catholic under Mary I, and then Protestant again under Elizabeth I.

These four changes to the accepted religion of the country happened within the space of just 11 years. It was a time of immense fear, full of plots, intrigues and conspiracies involving the highest levels of society.

Scotney is in the hands of a strong Catholic family who are forced to give consent for their daughter to marry the Protestant poet, Barnabe Googe. Their reluctance cast a cloud of suspicion around the family and when a Catholic Priest arrives unexpectedly at their door seeking refuge, things can only get worse.

You can may see a couple of pages from this chapter here.

He studied at Christ's College, Cambridge, and at New College, Oxford, but does not seem to have taken a degree at either university. He afterwards removed to Staple's Inn, and was attached to the household of his kinsman, William Cecil. In 1563 he became a gentleman pensioner to Queen Elizabeth. He was absent in Spain when his poems were sent to the printer by a friend, L Blundeston. Googe then gave his consent, and they appeared in 1563 as "Eglogs, Epytaphes, and Sonettes".

There is extant a curious correspondence on the subject of his marriage with Mary Darrell, whose father refused Googe's suit on the ground that she was bound by a previous contract. The matter was decided by the intervention of Sir William Cecil with Archbishop Parker, and the marriage took place in 1564 or 1565. Googe was provost-marshal of the court of Connaught, and some twenty letters of his in this capacity are preserved in the record office.

He was an ardent Protestant, and his poetry is coloured by his religious and political views. In the third "Eglog," for instance, be laments the decay of the old nobility and the rise of a new aristocracy of wealth, and he gives an indignant account of the sufferings of his co-religionists under Mary.

Can you imagine the tension during any family visits? A most unwelcome son-in-law! He and Mary had several children: Matthew, Thomas, Barnabe Jr., William, Henry, Robert, Francis, and Mary.

was born into the Leicestershire branch of the Blount Family in 1565. He attended school at Balliol College, Oxford. Afterward he went to Trinity for his university studies, but left shortly after arriving having converted to Catholicism. He travelled to the English College run by English priests of the Roman Catholic Order of the Society of Jesus at Douai in the Spanish Netherlands, arriving on 22 July 1583. The college was temporarily in Rheims due to ongoing conflict in Douai. In 1584 he continued on to the English College, Rome.

After five years at the English College in Rome, Blount was ordained a priest in 1589. He worked with Father Robert Parsons, S.J. to smuggle himself back into England in 1591 posing as returning sailor prisoners-of-war from the failed expedition against Spain by the Earl of Essex. He was taken before the Lord High Admiral Howard of Effingham to present his story. His knowledge of the events and of seamanship were good enough for him to pass and be allowed back into England.

Blount used Scotney Castle for his base of operations in the area from 1591 to 1598. He became a Jesuit in 1608, during the reign of James I.

In 1617, Blount was selected as Superior of the English mission of the Society. As Superior he took on the yoke of leadership of the English Jesuits. At the time there were approximately 200 Jesuits, 109 of which were in hiding in England.

In 1619, the Pope made England a trial province. Identification as a province indicated that the area covered had stability and permanence. Blount was appointed to the highest leadership position in a trial province, Vice-Provincial. Blount's task as Vice-Provincial was to organise the province for further validation at the next meeting of the Society of Jesus leadership. Blount organised five fictional colleges in London, Lancashire, Suffolk, Leicestershire and Wales.

Henry More, SJ was a great grandson of St. Thomas More. Blount died on May 13, 1638; Charles II's queen, Henrietta Maria, had a requiem Mass sung for him in her private chapel at Court.
Posted by Stephanie A. Mann at 12:30 AM