A Hymn by One of the Knox Brothers 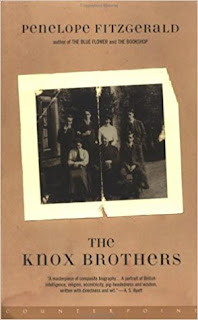 In this Marian month (dedicated to the Immaculate Heart of Mary), the Church of St. James, Spanish Place in London posted a verse from a poem/hymn to the Blessed Virgin Mary, "Through the Streets of Heaven" on its Facebook page. The lyrics are by Wilfred Knox, one of the Knox brothers, which included Ronald Knox the Catholic convert, Dillwyn Knox the wartime code-breaker, and Edmund Knox, the editor of Punch--not to forget their sister, Winifred, the author and historian. Wilfred was a High Church Anglo-Catholic, while their father was a prominent Evangelical, Low Church Anglican bishop.

The Marylebone Ordinariate community posted some information about this hymn in the context of the Ordinariate's Anglican patrimony in 2012, complete with a video and lyrics:

In the video below [on their blog], you can hear the last verse and a half of this rare but beautiful hymn being sung upon the occasion of the Annual Dedication Festival of St Mary's Bourne St (we described the background to that service here). Typical of the 1920s Anglo-Catholicism in which context it was written, it is a hymn to the Virgin in a mixture of English and Latin. You will note from the video that this very much matches the Bourne St service, where a rite of Benediction is given in Latin, interspersed with English.

The video contains what might even be an example of reverse Anglican patrimony (let's face it, apart from the use of great Anglican hymn tunes for O Salutaris and Tantum Ergo, there isn't much outwardly Anglican about the shape of the ritual seen in the video), in that the prayer before Tantum Ergo is the Book of Common Prayer's General Thanksgiving. This is not something I ever recall happening in my Bourne St days, although it was certainly the usual practice in my time at Pusey House in the early 1990s.

Using this prayer during Benediction is something that has become a hallmark of practice in the Ordinariate, including at the Ordinariate's own Anniversary Evensong and Benediction at the beginning of this year. Since some of our Bourne St friends attended that event, and indeed some of them perhaps read regularly of what is going in the Ordinariate, it is intriguing but definitely very pleasing to see this influence, adding to the Catholic influence that gave rise to the form of service in the first place. After all, not only are we borrowing a Bourne St hymn and bringing it into the Catholic Church, we as former Anglicans have brought the classic Anglo-Catholic service of Solemn Evensong and Benediction into the Ordinariate . . .

Please read the rest there. I highly recommend Penelope Fitzgerald's group biography of her father and her uncles, The Knox Brothers.
Posted by Stephanie A. Mann at 12:30 AM