The Villiers Brothers and Their Catholic Wives 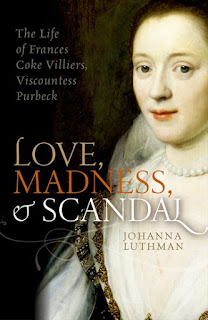 The Wall Street Journal (subscription only, of course) published a review of a new biography of Frances Villiers (nee Coke), Viscountess Purbeck, who was forced to marry John Villiers, the brother of George Villiers, the Duke of Buckingham and James I's Court favorite. Love, Madness, and Scandal: The Life of Frances Coke Villiers, Viscountess Purbeck is by Johanna Luthman and published by Oxford University Press:

The high society of Stuart, England (sic) found Frances Coke Villiers, Viscountess Purbeck (1602-1645) an exasperating woman. She lived at a time when women were expected to be obedient, silent, and chaste, but Frances displayed none of these qualities. Her determination to ignore convention contributed in no small measure to a life of high drama, one which encompassed kidnappings, secret rendezvous, an illegitimate child, accusations of black magic, imprisonments, disappearances, and exile, not to mention court appearances, high-speed chases, a jail-break, deadly disease, royal fury, and - by turns - religious condemnation and conversion.

As a child, Frances became a political pawn at the court of King James I. Her wealthy parents, themselves trapped in a disastrous marriage, fought tooth and nail over whom Frances should marry, pulling both king and court into their extended battles. When Frances was fifteen, her father forced her to marry John Villiers, the elder brother of the royal favorite, the Duke of Buckingham. But as her husband succumbed to mental illness, Frances fell for another man, and soon found herself pregnant with her lover's child.

The Viscountess paid a heavy price for her illicit love. Her outraged in-laws used their influence to bring her down. But bravely defying both social and religious convention, Frances refused to bow to the combined authority of her family, her church, or her king, and fought stubbornly to defend her honour, as well as the position of her illegitimate son.

On one level a thrilling tale of love and sex, kidnapping and elopement, the life of Frances Coke Villiers is also the story of an exceptional woman, whose personal experiences intertwined with the court politics and religious disputes of a tumultuous and crucially formative period in English history.

The note about the "religious disputes" of the era refers to the fact that Frances, in exile in France, became a Catholic--as had her estranged husband before in England--and even resided in a convent for a time. Why would Frances Villiers become a Catholic? Because from the Catholic Church she could obtain forgiveness of her sins. From the high commission of the Archbishop of Canterbury she had received only condemnation and public penance. Through the Sacrament of Confession, Frances received private, indeed secret, absolution and restoration to the the Grace of God.

It's interesting to note that Katherine Villiers (nee Manners), Duchess of Buckingham was also a Catholic--and that her marriage to George Villiers, the Duke of Buckingham was nearly as rocky as Frances's to John. George and Katherine had to get married to save her reputation, and as this post on the English Historical Fiction Authors blog shows, her devotion was not matched by his: 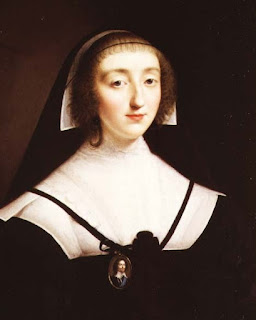 The Buckinghams lived a lavish life-style, but it seems clear that this was not the fairy-tale life which Katherine had imagined. Perhaps she had unrealistically believed that Buckingham would leave his life at court and devote himself exclusively to her, and in a bitter, reproachful letter in 1627 she told him that, ‘… there is none more miserable than I am, and till you leave this life of a courtier which you have been ever since I knew you, I shall think myself unhappy.’

Whatever the dreams and hopes for her marriage had been, Katherine had to contend with reality and accept that she had not only gained a husband but also all his family, which included the doting King himself. Then there were the mistresses, notably the spirited court beauty Lucy, Countess of Carlisle. When Buckingham was in Madrid with Prince Charles in 1623, during which time he was created a Duke, his behaviour at the straight-laced Spanish court caused great offence.

Buckingham again outraged convention and stretched Katherine’s devotion to the uttermost when he travelled to Paris in May 1625 to escort England’s new Queen, Henrietta Maria, to her new home. The English favourite scandalised the French court by blatantly making love to the French Queen Anne of Austria, giving scant thought to his pregnant wife at home. The Duke’s obsession with Anne, which he did not try to disguise, must have caused Katherine great heartache, and he made determined attempts to see the queen again.

Katherine was Catholic before she married George and had to conform to the Church of England to make their forced marriage possible. She returned to the Church afterwards. After the Duke of Buckingham was assassinated by John Felton, she married a Catholic Irish land magnate, Randal MacDonnell, 1st Marquess of Antrim.
Posted by Stephanie A. Mann at 12:30 AM