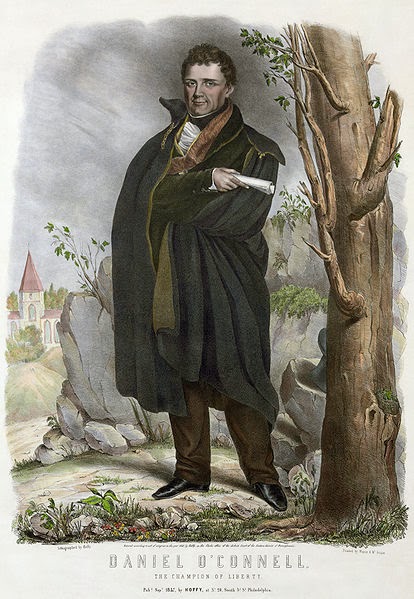 Francis Campbell, writing for The Catholic Herald, comments on the plan to honor Mahatma Gandhi with a statue in Parliament Square. He says it's a good idea, but that it highlights another mission statue: in honor of Daniel O'Connell

It is time for the Government to recognise the debt of gratitude we owe to Daniel O’Connell: the London-trained lawyer who went on to lead the Irish through a time of great turbulence and who could lay claim to be the inspiration for non-violent civil rights movements. Indeed, Gandhi himself looked to figures in 19th-century Irish history for inspiration, O’Connell among them. A statue of O’Connell would honour his legacy and send out a powerful message about democratic pluralism, inclusion and non-violence.

Nearly 170 years after his death, there is no statue of O’Connell erected anywhere in London, let alone Parliament Square. Yet few figures in the 19th or 20th centuries changed the course of Britain’s parliamentary democracy, and influenced the health and vitality of its democracy and pluralism, as much as he did.

O’Connell’s greatest contribution was in the area of religious pluralism. He fought for and won the right for Catholics to take their seats in Parliament. Choosing politics over force, he achieved Catholic emancipation through the passing of the Roman Catholic Relief Act in 1829, which also annulled the remaining Penal Laws and the Test Act, and helped to pave the way for the restoration of the Catholic Hierarchy in England and Wales, and Scotland. O’Connell’s 1829 Catholic Emancipation Act is also credited with helping to secure the passing of the Jews Relief Act of 1858.

O’Connell’s absence from his rightful place in Parliament Square is all the more grating given that Robert Peel, who initially opposed Catholic emancipation, is honoured there. It was a lonely campaign for O’Connell, and Peel was ultimately persuaded not on any grounds of enlightened principle, but simply by fear that failure to repeal prejudicial laws would trigger further rebellion in Ireland. Why should the former stand proud just minutes from our seat of power, and the latter be overlooked?

Campbell is exactly correct in his argument, but G.K. Chesterton anticipated him about 85 years ago, when he wrote about the differences between how the Catholic Church and the modern state responds to past injustices. To quote my own blogpost:

. . . in an article titled "The Early Bird in History", Chesterton notes "there's a common and current charge against the Catholic Church, that she is, as the phrase goes, always behind the times."
Not that there's anything wrong with that, he says, when you consider the times, but then he notes at least one instance in which the Catholic Church was far ahead of anyone else and in ways that no other institution had caught up with (in 1929, at least). He examines the rehabilitation of St. Joan of Arc. Chesterton notes that her canonization may have taken centuries, but her rehabilitation did not. The Church investigated, acknowledged the injustice, and cleared her name during the lifetime of her family-- of her mother.


Then Chesterton considers some other cases: Did Edward III repent of the brutal execution of William Wallace by Edward I? Did Elizabeth I rehabilitate Sir Thomas More, acknowledge the error of his trial, conviction, and execution as a traitor? Of course they did not.
He acknowledges that in the 19th century the English did "make a romance about Wallace" and finally start thinking of St. Joan of Arc with more favor and recognition of their own tawdry role. (Shakespeare's depiction of Joan, he notes, features "insular insults".)
Chesterton has two more historical parallels: have the English honored Daniel O'Connell, the catalyst of Catholic Emancipation within one hundred years of that great milestone (1829-1929)? Have they accepted Robert Emmet of Ireland as well as they've accepted George Washington of the United States of America? No--in 1929, they had not. Thus, Chesterton demonstrates that the Catholic Church was not so far behind the times as "people" say, and in fact, the secular world is really far behind in the process of acknowledging past injustices.
Posted by Stephanie A. Mann at 12:30 AM