Restoration of the Society of Jesus and England

Today is the feast of St. Ignatius of Loyola, founder of the Society of Jesus--The Jesuits, and 2014 also marks the 200th anniversary of the restoration of the Jesuit order after its suppression in 1773:

Pressured by the royal courts of Portugal, France and Spain, Pope Clement XIV suppressed the Society, causing Jesuits throughout the world to renounce their vows and go into exile. The suppression lasted for 41 years, until the Society’s restoration on August 7, 1814.

In England the suppression did not have quite the impact that it had on the Continent, because it depended on the government to enforce:

In 1762 because of the  suppression of the Society of Jesus in France, the English college in St Omer was transferred to Bruges. Despite the storm clouds the English Province was strong: in 1768 there were approximately 300 Jesuits, 26 of whom worked in Maryland and 136 in England.

The position of the Jesuits in England after Pope Clement XIV's brief of 1773, "Dominus ac Redemptor" - suppressing the Society of Jesus - was anomalous. The Society did not exist officially in England so it could not be suppressed by the secular government. Ironically relations between secular clergy and Jesuits were extremely friendly at the time. Ex-Jesuits were able to remain united under a type of superior associated with the college then in Bruges (eventually moving to Liège and finally in 1794 to Stonyhurst) and to retain ownership of the province's not inconsiderable assets.


Even before the universal restoration, Jesuits in England benefited from the "anomalous" situation and the support of the order in Russia:


In March 1801 Pope Pius VII approved the status of the Society of Jesus that continued to exist in Russia because of the protection of the Russian Tsars.


In 1803, thirty-five ex-Jesuits renewed their vows at Stonyhurst under Marmaduke Stone as first Provincial of the restored English Province.

Despite some opposition from the English Vicars Apostolic and the insertion of a clause in the Act of Catholic Emancipation (1829) that forbade Jesuits and other religious orders from accepting novices in hope of their eventual extinction, the province thrived in the nineteenth century.


Long before the suppression or the restoration, Jesuits had played an important, although sometimes controversial, role in the English mission: 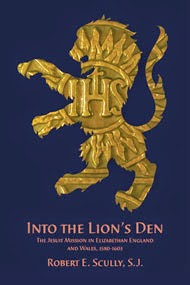 Between Ignatius's begging mission to England in 1531, and the foundation of a mission in 1580, Jesuit contact with England was sporadic.  The second half of the 16th century was one of religious upheaval in England, since Henry VIII’s break with Rome in 1534. Elizabeth 1 (1558-1603) was determined to build a Protestant state, and, fearing influence or invasion by stronger Catholic European monarchies, effectively banned Catholic worship, and outlawed Catholic priests. To become a Catholic priest young Englishmen would now have to train and probably work abroad.  Yet many Englishmen joined the Jesuits and worked throughout the Jesuit world: Edmund Campion was sent to Prague; Thomas Stephens to India; John Yates to Brazil.  The English College for the training of priests from England was founded in Rome in 1579 and Pope Gregory XIII entrusted the college's administration to the Jesuits.

Seizing the opportunity, William Allen, leader of English Catholic exiles and later a Cardinal, persuaded Father General Everard Mercurian to approve a Jesuit mission to England. The first missioners, Campion, Robert Persons, and Ralph Emerson, departed Rome in April 1580. By the end of 1581, Campion had been executed and Persons was back on the continent, never to return to England.

The history of the Elizabethan Jesuits is the stuff of legends and hagiography: clandestine meetings, priest-holes, raids, escapes from the Tower of London, imprisonment, torture and martyrdom.

So intense was persecution that periodically Father General Claudio Acquaviva questioned the mission's continuation. Persons, along with Jesuits in England such as Robert Southwell and John Gerard, strengthened the resolve of lay Catholics through the Spiritual Exercises.

On the continent Robert Persons and others sought to alleviate the suffering of Catholics in England by encouraging invasion of England and deposition of Elizabeth. See Jesuit conspiracy theories for more details.

Indeed, the stories of the Jesuit martyrs are often thrilling--St. Edmund Campion, St. Robert Southwell, St. Henry Walpole, St. Henry Morse, St. Philip Evans, St. Nicholas Owen (the lay brother and master builder), St. Henry Garnett, Blessed Edward Oldcorne, St. David Lewis, etc. The two books I would recommend for those wanting to know more about this history are Into the Lion's Den: The Jesuit Mission in Elizabethan England and Wales, 1580-1603 by Robert E. Scully, SJ, published by The Institute of Jesuit Sources, which I reviewed here, and for the stories of the individual martyred saints and blesseds, Jesuit Saints and Martyrs by Joseph N. Tylenda, SJ.
Posted by Stephanie A. Mann at 12:30 AM