From the Middle Ages to the Renaissance, Thomas Cahill Strikes Again! 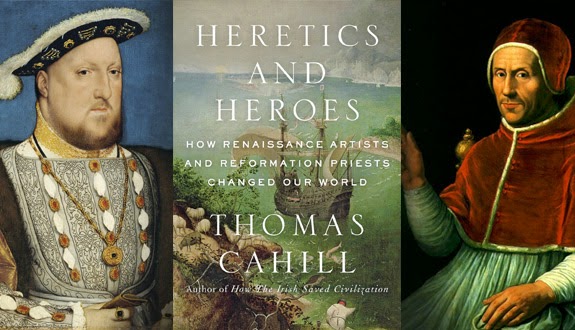 Years ago I read Thomas Cahill's How the Irish Saved Civilization (which should probably be titled "How the Irish Saved Western Civilization") and several years ago I toted Mysteries of the Middle Ages with me on a trip to Paris--it was fun to read about Heloise and Abelard in situ, especially one day while seated in Au Sauvignon, hearing two American ex pats discussing the end of one of their love affairs. I almost wanted to tell them that love affairs can end much more badly! Cahill's animus toward St. Bernard of Clairvaux and his relentless hatred of any pope or bishop, any member of the Church's hierarchy, wore on me after awhile. As an antidote, I went to the Musee de Cluny and reveled in some of the great religious art of the medieval era. My journal for that visit includes the note that Cahill really didn't understand the Middle Ages, because he didn't understand the Church or the Catholic faith--and his hermeneutic of understanding the past by how much it conforms to current values, specifically his values, kept him from entering in to the past and trying to comprehend it.

Sounds like that's the issue with his latest book in the "Hinges of History" series, according to Michael B. Kelly in The Catholic World Report:

Since publishing the amusing How the Irish Saved Civilization in 1995, best-selling author Thomas Cahill has added five further volumes to his history of the West, the Hinges of History series. The latest volume, Heretics and Heroes: How Renaissance Artists and Reformation Priests Changed Our World, contains Cahill’s take on the great European intellectual, cultural, and religious movements of the period now commonly referred to by historians as “early modern”. According to the author, this series aims to “retell the story of the Western world as the story of the great gift-givers, those who entrusted to our keeping one or another of the singular treasures that make up the patrimony of the West.” Such “gift-givers” left behind “a world more varied and complex, more awesome and delightful, more beautiful and strong” than the one they had entered. . . .

But over-simplifications and reliance upon older scholarship aside, the main problem with the book is its neglect of its advertised task, i.e., explaining “How Renaissance Artists and Reformation Priests Changed Our World.” Heretics and Heroes, at length, is essentially a search through history for characters presenting features that appear “modern” to the searcher. He then provides lively biographical vignettes that emphasize these features, and (as it were) announces—“Voila, modernity in the Renaissance (or Reformation).”

But simply identifying new trends and developments in art and religion in the early modern period is not the same as explaining how modernity came to be. Emblematic for the whole work may be Cahill’s account of the Peace of Augsburg in 1555, when it was momentously resolved that each prince in the Empire could decide his own domain’s religion (cujus regio, ejus religio)—Cahill snappily explains, “And so it became” (262). And apparently that is that. Readers wishing some sustained argument about the gestation of the modern world will be disappointed.

In the end, Heretics and Heroes is not an attempt to understand, or explain, the past from the perspective of the people of the past. It is a history of progress towards us, or, rather, towards those of us who are truly modern, in the right way. It is a peculiar kind of hagiographical enterprise—the scouring of history to find the people that are most like us. In fact, in his final chapter Cahill apologizes that, notwithstanding his good intentions, he has produced so many pages about “know-it-alls . . . prescribers and proscribers,” the “excluders” and limiters, “who want their circle—the circle of the saved—to be exclusive, as small and as (uncomfortably) intimate as possible.”

Read the rest here. Can you imagine what Cahill will do when he discusses the French Revolution? Surely the Enlightenment and the "Age of Revolution" will be the next "Hinge of History"!
Posted by Stephanie A. Mann at 12:30 AM