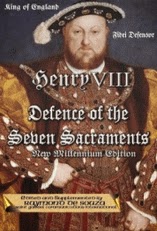 When Henry VIII separated the Catholic Church in England from the universal Catholic Church, he set himself as the new authority for Catholics in England--the Supreme Head and Governor of the Church. (I read once that even Archbishop Thomas Cranmer recognized that claiming to be the "Head" of the Church was a little much--Jesus Christ is the Head of His Church). Henry created and all his successors save one maintained control over the worship, prayer, doctrine, and discipline of the Church of England. When the monarch represented the State, this ecclesial power was centered on the king or queen.

Through the English Civil War and the Glorious Revolution, the concentration of power in the monarch was distributed to Parliament, representing the people, and control of the Church of England transferred to Parliament--and thus to the political party forming the government as the majority in Parliament and the Prime Minister. The Church of England (the CofE), being part of the State, does not lead the State, but the State--representing the people--leads the Church of England. This change in authority is crucial because it means that the CofE is not leading the people into what Jesus teaches through his Church, but that the people influence the CofE to accept what they want--and British society today wants women priests and bishops because it values equal access to power and influence above everything else.

Henry VIII would never have imagined women ordained to the priesthood or the episcopate, but he set in motion the Church's decision this week to ordain women bishops, because he placed the State above the unity of the Jesus Christ's Church on earth. For the sake of his dynasty's succession he contributed to the division of the Church, already riven on the Continent by Martin Luther and other reformers. This, when he had sought the title of Defender of the Faith by protesting against Luther's teaching against the Catholic doctrine of the Sacraments--including Holy Orders and the Eucharist, two Sacraments completely intertwined. According to the Church's doctrine, which Henry defended in Assertio Septem Sacramentorum and seemed to continue to uphold throughout his reign condemning those who denied the Real Presence to death by being burned alive, only a sacramentally ordained priest, with the valid and licit Form and Matter, can celebrate the Holy Sacrifice of the Mass. Henry not only continued to defend the Real Presence of Jesus in Holy Communion; he demanded an unmarried priesthood and episcopate (Cromwell had to hide his wife from Henry--and Elizabeth I made the same demands); he did nothing to end the ordination of secular, non-order priests (he eliminated the orders when he dissolved the monasteries AND the friaries.)

So Henry set up the succession, with his heirs leading the Church that would destroy nearly all the Seven Sacraments he had defended, leaving only Baptism--but there is a great range of opinion on what Baptism really is within the CofE, with even the denial of the Holy Trinity which is at the core of its sacramental grace countenanced as something "indifferent" to Christian doctrine and worship. Although Henry's authority in the CofE kept it from making greater "progress" into Lutheranism or Protestantism, to some extent, Edward VI and Elizabeth I, with the help of Thomas Cranmer's Book of Common Prayer and Thirty-nine Articles, brought it firmly into the Protestant doctrine of salvation and sanctification. And Parliamentary conflict between Puritans and Elizabeth and then the Stuart monarchs James I and Charles I culminating not just in the Civil War and Interregnum but even more decisively in the Glorious Revolution, consolidated the Protestantism of the CofE.

Father Dwight Longenecker notes on his blog that we've been living in a dream when we hoped that the CofE was a via media between Catholicism and Protestantism, and that there was a real hope for full, true and corporate reunion. Blessed John Henry Newman woke up from that dream in September and October of 1845 and joined the Catholic Church that October 9th--but he and his Oxford Movement companions had indeed dreamed the dream:

On July 14 1833 John Keble preached his famous sermon on National Apostacy–which is regarded by historians as the beginning of the Oxford Movement. (You can read the sermon here) In one of those nice historical co-indidences (sic) (if you believe in such things) the Church of England General Synod’s vote in favor of women bishops took place on the 181st anniversary of Keble’s sermon.

The essential point of the Oxford Movement–coming just a decade or so after Catholic Emancipation [actually, just three (3) years after!]–was that the Church of England was not, at it’s (sic) core, a Protestant Church, but the ancient Catholic Church reformed. The men of the Oxford Movement were called “tractarians” after the series of leaflets or tracts written and published by John Henry Newman and his friends. In tracts and sermons the Tractarians tried to re-weave into the three hundred year old Protestant Church of England a new Catholic strand. (Read more about Newman here) The success of the Anglo-Catholic movement was a witness to their work. Not only in theology, but in literature and liturgy, in art and architecture, in music and academic studies there was a flourishing revival of a Catholic sentiment and spirituality.

It was, however, simply an additional Anglican costume. Already within the Church of England there were two strands: the old Protestant liberal strand of religion which was firmly attached to the principles of the Enlightenment, bonded with the political establishment and which was upper class, educated and elitist. The Methodist movement of the eighteenth century grafted onto the historic Protestant, rationalist liberalism a new kind of Evangelical, Calvinist fervor. Now, a century after the Wesleys (and also springing from Oxford) the Tractarians added a Catholic strand which came to be called Anglo-Catholicism.

Read the rest of his article there.

Individual Anglo-Catholics have been "poping" since the CofE condemnation of Newman's Tract 90. One by one, or family by family, they came into the Catholic Church. Pope Emeritus Benedict XVI showed the true path to a more corporate reunion between Anglicans and Catholics: the Personal Ordinariate. The Personal Ordinariate of Our Lady of Walsingham is reaching out to those who because of this Anglican decision and the previous decision to ordain women as priests, are beginning to see that the via media is a church of paper and that the Catholic Church is "the one true fold of Christ". If they want the truth, they need to follow Blessed John Henry Newman, the late Father Ray Ryland, Father Dwight Longenecker, and those who are making up the Ordinariates in Great Britain, North America and Australia now.