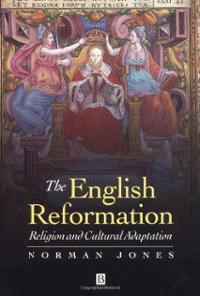 Norman Jones published this great study in 2002: The English Reformation: Religion and Cultural Adaptation. From the back cover:

Recent debate over the English Reformation has turned around how Catholic the nation was before the Reformation. Most scholars now believe that there was little popular support for the change in religion imposed by Henry VIII. And yet, by the end of Elizabeth's reign England was clearly Protestant. It had abandoned much of its late Medieval culture and replaced it with a new formulation. This book explores how the English, over three generations, adapted to the religious changes and, in the process, radically reconstructed their culture.

Using case studies, the author explores how individuals and the institutions in which they lived and worked, such as families, universities, towns, guilds, and Inns of Court, refashioned themselves in the face of the rapid social, ideological, political, and economic changes loosed by the Reformation. Tracing these responses across three generations, the author emphasizes the way generational interaction and self-interest interrelated to adapt to new circumstances, creating, by the late sixteenth century, a multi-theological culture that exalted nationalism and valued the individual conscience.

This is a fascinating study indeed which demonstrates that the unintended consequences of the English Reformation were: division and anarchy; loss of respect for authority; violence and hatred; loss of community; loss of shared virtues and consensus about behavior; greater secularization; more emphasis on individual conscience and self-interest--and an entirely changed worldview.

The dissolution of the monasteries and the chantries, the official changes in religion that effected the guilds, colleges, and other associations, all led to the abrogation of wills and bequests, and again, an increased secularization. Organizations like guilds and colleges that had had religion, prayer for the dead founders and benefactors, celebrations and services, Mass and vespers as an integral part of their organization stripped all of that away. They became mostly secular, with an annual sermon on their foundation anniversary (which had been their patron saint's feast day) and then not even that.

In each chapter as Jones looks at the changes that occurred in families, institutions and society through the state-sponsored creation of the via media, with the imposition of uniformity and the Book of Common Prayer, two issues are paramount: individual conscience (what Blessed John Henry Newman would later call "the right of self-will") and self-interest, making the individual. The entire Catholic structure of what later popes would call the Mystical Body of Christ--but which did exist in practice before the English Reformation, was dismantled. As he notes, "When conscience became the measure, it left people confused, willing to grant that individual virtue could only be determined by each individual unless it resulted in actions that damaged secular interests. . . . For many, this meant license, and for some it meant that they had to become more and more shrill in their attempts to drown out competing consciences. The little God sitting inside us, conscience, that was expected to be an infallible guide to God's will, turned out to be a Trojan horse." (p. 195)

In the chapter on "Reinventing Public Virtue", for example, Jones studies how usury, which had been condemned by the Catholic Church and by civic and canon law before the Reformation, was gradually accepted (although regulated) by the only law left, civic law. This "community sin" was taken out of English law, while local sheriffs and officials went after individuals who used blasphemous language. Queen Elizabeth I was never charged, but she certainly violated those laws against blasphemous language, as she often swore "by the mass, by God, by Christ and by many parts of Christ's body, and by saints, faith, troth, and other things. In 1585 William Fuller dared to tell the Queen that her swearing was an evil example to her subjects, encouraging adultery." (p. 167). As Jones notes, she probably replied, "by God's teeth I will not!" stop swearing.

In some ways, Norman Jones seems to have anticipated what Brad Gregory would examine in his 2012 study, The Unintended Reformation: How a Religious Revolution Secularized Society. Norman Jones is no apologist for the world view before the English Reformation, as Gregory is for the Catholic world view in Europe before the Reformation. Gregory calls for reform in his study, but Jones is just presenting an excellent overview of social and cultural change. In a way, reading his book reminded me of Eric Ive's The Reformation Experience: Life in the Turbulent 16th Century; it seems to me that Jones succeeded where Ives failed to describe how people reacted and experienced the Reformation in England; using case studies and describing individual lives, Jones demonstrates the tremendous forces of change in the sixteenth century.
Posted by Stephanie A. Mann at 12:30 AM