From Conference to Collected Essays

Augustana will host the conference "Reforming Reformation" on October 17-19, 2010, organized by Thomas F. Mayer (History). The object is to undertake a fundamental rethinking of all the possible meanings of the term reformation, concept and label. In order to stimulate such thought, the conferees will be divided into four vaguely "national" panels, emphasizing places that either did not have a "real" reformation or had an odd one. This will serve to put in perspective what far too many people still count as the only true reformation, the Protestant one especially in its Lutheran and Calvinist guises. Those four panels will treat Italy, England (emphasizing the Marian interlude since it has almost always been considered a bump on the way to seeing God's will done), the Empire and Spain. Needless to say, the conference will be strongly interdisciplinary, with participants from literature, art history, theology and history.

The conference will be spent mainly in discussion, rather than sitting through papers one after another. Participants will submit their talks at least a month in advance and they will then be circulated to all and sundry. They will also be posted on the Web in such a way that folk at Augustana can get access to them. Sessions will consist of ten-minute summaries followed by discussion and audience interventions. We want to involve students and members of the community as much as possible. The sessions will mix papers up geographically to see what extra comparative sparks that can strike. The conference will open with a plenary session on Sunday evening, mainly to introduce the participants and the themes. The working sessions will be spread through the day on Monday (various history faculty have generously given up their rooms and periods) before we end with one more plenary session, probably at 8:30 on Tuesday morning.

The participants have been urged to think as much as possible about big questions and broader implications. The final versions of their papers will go into a volume to be edited by Mayer and published in his series, "Catholic Christendom, 1300-1700," which will also include a ruminative essay based on the discussions.

Sponsored by the Office of the President, the Institute for Leadership and Service and the Center for the Study of the Christian Millennium, with the support of the Humanities Fund and the Department of History 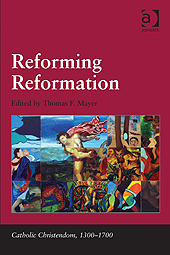 The result of this conference was indeed a book from Ashgate, which publishes some of the most interesting books at the highest prices imaginable, especially in their Catholic Christendom, 1300–1700 series. The book has the same title as the conference, and Ashgate describes it thus:

The Reformation used to be singular: a unique event that happened within a tidily circumscribed period of time, in a tightly constrained area and largely because of a single individual. Few students of early modern Europe would now accept this view. Offering a broad overview of current scholarly thinking, this collection undertakes a fundamental rethinking of the many and varied meanings of the term concept and label 'reformation', particularly with regard to the Catholic Church.

Accepting the idea of the Reformation as a process or set of processes that cropped up just about anywhere Europeans might be found, the volume explores the consequences of this through an interdisciplinary approach, with contributions from literature, art history, theology and history. By examining a single topic from multiple interdisciplinary perspectives, the volume avoids inadvertently reinforcing disciplinary logic, a common result of the way knowledge has been institutionalized and compartmentalized in research universities over the last century.

The result of this is a much more nuanced view of Catholic Reformation, and once that extends consideration much further - both chronologically, geographically and politically - than is often accepted. As such the volume will prove essential reading to anyone interested in early modern religious history.

Ashgate provides a sample from the book, the Introduction by Thomas Mayer, and Augustana provides as least two of the presentations on-line, by Peter Marshall and by Brad S. Gregory.
Posted by Stephanie A. Mann at 12:30 AM