A Judge and Judgement: the Tomb of Sir Thomas Fleming 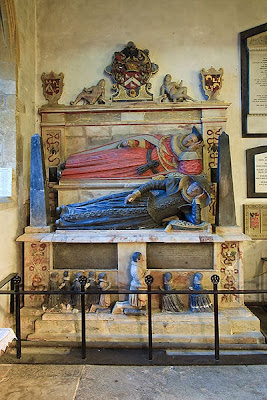 The main reason for this post today is the tomb of Thomas Fleming, who died on August 7, 1613: he was judge in the trial of Guy Fawkes in 1606. He and his wife are entombed in the church of St Nicholas, North Stoneham in Hampshire. According to the wikipedia article, the inscription reads:

In most Assvred Hope of A Blessed Resvrection, Here Lyeth Interred ye Bodie of Sir Thomas Flemyng, Knight, Lord Chief Jvstice of England; Great Was His Learning, Many Were His Virtves. He Always Feared God & God Still Blessed Him & ye Love & Favour Both of God & Man Was Daylie Upon Him. He Was In Especiall Grace & Favour With 2 Most Worthie & Virtvovs Princes Q. Elizabeth & King James. Many Offices and Dygnities Were Conferred Upon Him. He Was First Sargeant At Law, Then Recorder of London; Then Solicitor Generall to Both ye Said Princes. Then Lo: Chief Baron of ye Exchequer & after Lo: Chief Jvstice of England. All Which Places He Did Execvte With So Great Integrity, Justice & Discretion that Hys Lyfe Was Of All Good Men Desired, His Death Of All Lamented. He Was Borne at Newporte In ye Isle Of Wight, Brough Up In Learning & ye Studie Of ye Lawe. In ye 26 Yeare Of His Age He Was coopled in ye Blessed State of Matrimony To His Virtvovs Wife, ye La: Mary Fleming, With whom He Lived & Continewed In that Blessed Estate By ye Space Of 43 Yeares. Having By Her In that Tyme 15 Children, 8 Sonnes & 7 Davghters, Of Whom 2 Sonnes & 5 Davghters Died In His Life Time. And Afterwards In Ripeness of Age and Fulness of Happie yeares yt Is to Saie ye 7th Day of Avgvst 1613 in ye 69 Yeare Of His Age, He Left This Life For a Better, Leaving Also Behind Him Livinge Together With His Virtvovs Wife 6 Soones & 2 Davghters.

The memorial is called "the floating Flemings" as Thomas and Mary are depicting resting on their bent elbows. Their surviving children are depicted kneeling and praying beneath their parents--but we know they are not praying for the souls of their departed parents! More on the judge and his judgement of Fawkes here, from the parish website. The image is sourced from wikipedia commons under a Creative Commons Attribution license.
Posted by Stephanie A. Mann at 12:30 AM