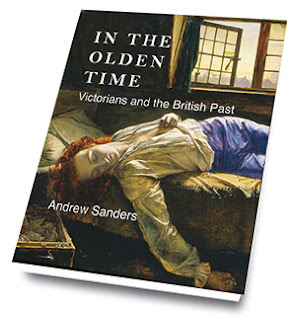 Victorians saw themselves as moral and progressive. They frequently referred to the brutal history that had preceded them. The more benighted the past, the better they seemed. Thus, as Andrew Sanders explains, a great deal of British history before the 18th century was popularly characterised as being ‘little more than a series of judicial executions and violent or untimely deaths. The sad stories of the death of kings were retold with relish and the sword, the axe, the assassin’s dagger and the poisoned cup became a stock in trade of history painting’. 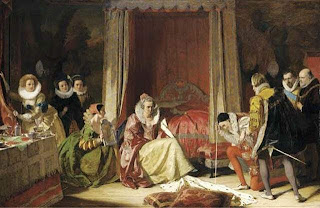 The beautifully titled painting Queen Elizabeth Discovers She is No Longer Young by Augustus Egg is typical of the way Elizabeth, with her capricious ways and refusal to do the womanly thing, to marry and procreate, was contrasted with the Victorians’ own dear queen. The 1848 picture shows a haggard, hook-nosed Elizabeth grumpily averting her eyes from a looking-glass in front of a group of fawning courtiers.

In contrast Queen Victoria holds Prince Arthur in her plump arms to receive a jewelled box from the elderly hero, the Duke of Wellington, while that symbol of magnificence, the Crystal Palace, glimmers in the distance in Franz Xaver Winterhalter’s painting The First of May 1851.


Sanders, a Dickens expert and emeritus professor of English at Durham, builds on the work of Roy Strong’s And When Did You Last See Your Father? The Victorian Painter and British History (1978). Sanders’ contribution is to explore the literary nature of Victorian history to reveal how painters were indebted to written record. Literary figures, moreover, not only wrote that record, they became part of it. In the 1840s Thomas Carlyle had identified the literary man as a new breed of hero. Henry Wallis’ 1856 painting of the teenaged suicide Thomas Chatterton was a new kind of history painting. Saunders suggests the image represented to the Victorians both the 18th-century’s neglect of the man of letters and, correspondingly, their own enlightened approach, as they were prepared to commemorate him.

Jad Adams does not mention in his review how Sanders recounts the Victorian view of the English Reformation, but according to the publisher, Yale University Press, Sanders focuses on Pugin and Cobbett:

In this richly textured and wide-ranging survey of Victorian attitudes to the past, Andrew Sanders builds on Roy Strong’s groundbreaking book And when did you last see your father?: The Victorian Painter and British History (1978). Sanders explores the essentially literary nature of Victorian history writing, and he reveals the degree to which painters were indebted to written records both fictional and factual. Starting with a stimulating comparison of Queens Elizabeth I and Victoria, In the Olden Time examines works by poets and painters, essayists and dramatists, architects and musicians, including Jane Austen, John Donne, William Shakespeare, and John Soane. Together with a study of religious history as seen through the eyes of architect and critic Augustus Pugin and journalist William Cobbett, this book offers an original view of Victorian responses to British history, presenting a fresh investigation of unexpected Victorian attitudes and the establishment of particular 20th-century prejudices and bias.

I would think that James Anthony Froude would be represented as the mainstream of Victorian attitudes to the English Reformation in historical prose, but Sanders' emphasis on historical views of the past seen through the arts and literature looks as fascinating as an examination of Victorian historiography would be--perhaps even more so. The whole genre of historical painting appears to be a great subject for exploration. Think of the effect of Delarouche's painting of Lady Jane Grey on the scaffold and how it influenced the common views of her as an innocent victim and object of pity.
Posted by Stephanie A. Mann at 12:30 AM