On this day, November 4, in 1501, Arthur, the Prince of Wales, and Katherine of Aragon, daughter of Isabella of Castile and Ferdinand of Aragon, met for the first time. They would marry ten days later, on November 14 at Old St. Paul's in London. Arthur died in Wales nearly five months later, on April 2, 1502 and Katherine of Aragon remained in England while decisions about her dowry and marital future worked themselves out. Her father-in-law Henry VII obtained a papal dispensation so she could marry his second son, Henry, who had been intended for a life in the Church. When the first Tudor king died, his young son married Katherine of Aragon--quite happily and enthusiastically, too. 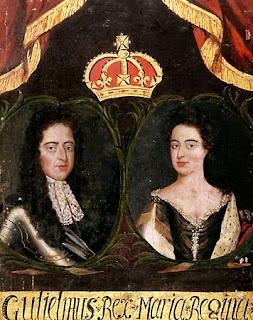 176 years later, Mary, eldest daughter of James, the Duke of York married William III, Prince of Orange on November 4, 1677. They married on William's mother's birthday. His mother was Mary, the Princess Royal, eldest daughter of Charles I and Henrietta Maria, born in 1631. Henrietta Maria left England at the beginning of the English Civil War in 1642 to deliver her daughter to William II of Orange (they had been married in 1641 but she Mary of Orange was too young--10 years old--to begin married life!). The marriage of William III and Mary in 1677 indicated a shift in Charles II's policy against France and towards Holland. Ten days after Mary and William III married, he celebrated his birthday, as he was born November 14, 1650.