Mary of Guise, Mother and Regent 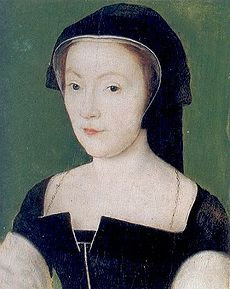 Born November 22, 1515--doesn't that portrait look like a real person? You know what I mean--sometimes the faces look like the ideal of an era. You see her Frenchness--her will--her whimsy, even. She is Mary, of the house of Guise, and none other.

She was the second wife of James V of Scotland, mother of two boys who died young, and then mother of a little girl who became Queen of Scotland as an infant when her father died after being defeated in a battle with England.

Mary of Guise was part of a great family of France often at odds with the reigning house of Valois. Because of her family ties, her daughter Mary was betrothed to the Dauphin of France when Henry VIII of England wanted to arrange a marriage between his son Edward and Mary, Queen of Scots. Mary of Guise pretended to go along with Henry VIII's wishes (which at one time included his marriage to HER) but escaped to Stirling Castle. This led to the "Rough Wooing" of Scotland by English forces--that is, military attacks, inncursions, murders, etc.

Once the marriage between Mary and Francois, the Dauphin of Henri II and Catherine de Medici was arranged, the young Queen went to France while her mother, Mary of Guise, remained in Scotland, serving as Regent.
Posted by Stephanie A. Mann at 2:07 AM