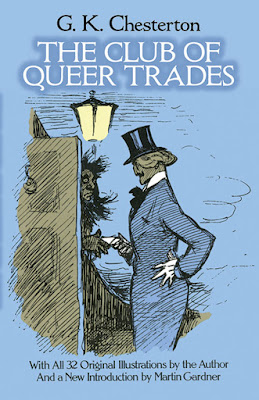 Our local G.K. Chesterton reading group is getting together tomorrow night at Eighth Day Books to discuss another collection of "detective stories" by Chesterton: The Club of Queer Trades.

I violate my rule of limited Lenten blogging with a post about this book, which I think is real Chesterton gem: well-written, with a twist in each story, two brothers and a narrator ready for action and adventure, elegant descriptions of London and an even more elegant conceit at its center, as Dale Ahlquist notes:

At the beginning of the 20th century, in detective fiction there was Sherlock Holmes and that was all. There were other fictional detectives, to be sure, but they were only bad imitations of Arthur Conan Doyle’s famous consulting detective. The sleuths offered by other writers would try to outdo Holmes in eccentricity and in solving crimes that were evermore contrived and convoluted. But in 1905 a book of mysteries came along that finally managed to turn the Sherlock Holmes idea on its head. The book was The Club of Queer Trades by G.K. Chesterton. His detective, Rupert Grant, is a Sherlock Holmes-like private eye who investigates crimes and chases crooks with great self-assuredness in his powers of deduction. But he is always wrong. The hero of these stories is not Rupert, but his older brother, Basil Grant, a retired judge. In each case, Basil proves to Rupert that there has been no crime and no crooks.

The Dover edition we're reading includes Chesterton's original drawings and an introduction by Martin Gardner, the late mathematician and annotator (The Annotated Alice, The Annotated Innocence of Father Brown, The Annotated Thursday, etc), who wrote "Mathematical Games" columns for Scientific American for 25 years!

Much as he admired Chesterton, and even though he considered himself a Theist, Gardner could not submit to organized religion, or even the Catholic Church.

Our club meets at 6:30 p.m. on Friday, the 13th of March on the first floor of Eighth Day Books, right under the top shelf of Chesterton's works. I plan to bring some suitable Lenten snacks. Drop by if you're in Wichita, Kansas, near 2838 East Douglas Avenue at that time.
Posted by Stephanie A. Mann at 12:00 AM