The English Reformation and the American Protestant Empire 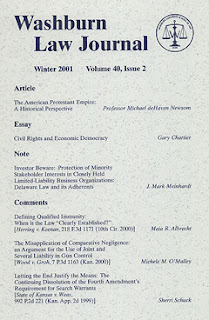 I break my posting fast again to comment on some recent reading.

As followers of this blog may know, one of its themes is religious freedom and the lessons of the English Reformation reflected in the Constitution of the United States of America. Earlier this year--seems a very long time ago now--when researching the anniversary of Prohibition in 1920, I found an article by one Michael DeHaven Newsom (Howard University School of Law): "Some Kind of Religious Freedom: National Prohibition and the Volstead Act's exemption for the Religious Use of Wine" published in the Brooklyn Law Review, Volume 70, Issue 3, 2005.

Then I found Professor Newsom's previous article, "The American Protestant Empire: A Historical Perspective", published in the Washburn Law Journal (Washburn University is in Topeka, Kansas), Volume 40, Issue 2 (Winter, 2001), which I finished reading last week. (I purchased a copy of the journal since I could not access it on-line.)

And I've found another article online, "Common School Religion: Judicial Narratives in a Protestant Empire", published in the Southern California Interdisciplinary Law Journal (Volume 11, 2002), which I have not yet read.

In the two articles I've read, Newsom traces the history of the English Reformation in its religious settlements through the Tudor and Stuart dynasties and how they impacted religious practice and political systems in the British American colonies and in the Federal Constitution and the States' Constitutions of the United States of America. In the Washburn Law Journal article he provides a historiographical overview of the religious settlements of the English Reformation from legal, political, social, and judicial enforcement perspectives as the background to the American religious settlements from those same perspectives. In other two articles, he applies that background to specific events and laws, specifically, Prohibition of the production, distribution, and sale of alcoholic beverages and the public school or common school system in the United States of America, having previewed both causes in the Washburn article.

His thesis is that the establishment clause of the First Amendment was not really for the protection of religious liberty for all in the United States of America, but an effort to protect the British colonial Protestant Empire by allowing the states to establish official Protestant churches and thus protect Protestantism in the states, individually and united. In a footnote at the beginning of the Washburn Law Journal article, he offers his opinion that this Protestant Empire has been an unmitigated disaster for Native Americans and African Americans, and detrimental to ethnic whites (Jews, Catholics, Eastern Orthodox). He focuses on American anti-Catholicism in the latter part of that article, noting that fear of Catholics influenced Protestant support of Prohibition and the religious instruction in the Public/Common Schools.

Newsom relies on some definitely Whiggish sources, especially in his evaluation of Mary I (he was writing before the mini-wave of re-evaluations of her reign), citing attacks on her intelligence and character in a footnote(!). He ignores the work of Christopher Haigh, John Bossy, and Eamon Duffy entirely, referencing A.G. Dickens, G.R. Elton, Jasper Ridley, etc. He cites J.J. Scarisbrick's biography of Henry VIII but not his The Reformation and the English People.

Newsom has some blunt opinions: he minimizes Cromwell and Cranmer to emphasize Henry VIII's methods and intentions; he opines that "the Edwardians went too far too fast" (216); that the Marian "obsession with persecuting heretics had much to do with the inattention to propaganda" (217), which Eamon Duffy's later Fires of Faith would prove not as true as Newsom thought in 2001, relying on Loades and Ridley; and even though he admires Elizabeth I's overall balance of Suasion and Coercion, he admits that "ideology obviates the need to establish the fact of a particular case" in her dealing with Catholics and real and supposed plots against her. (219) 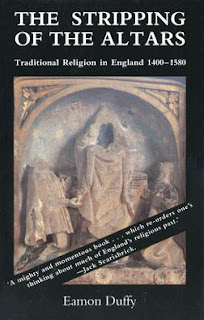 In his estimation of the state of the Catholic Church in England before the Reformation, Newsom is insistent that there had been a "medieval distortion of the liturgicological meaning of the Mass" (212), emphasizing a new division between the priest and the people during the celebration of the Mass and the fact that the priest alone received both forms of Holy Communion (the Body and the Blood), while the people received Holy Communion infrequently. This means of course that he puts the emphasis on the Sacrament of Holy Communion and does not acknowledge the power of the Sacrifice of the Mass, nor the people's participation in that Sacrifice, nor the community of the Church, expressed in what Newsom calls the "extra-liturgical" elements of parish life, like the Corpus Christi Guilds--again, if he had read Eamon Duffy's The Stripping of Altars, first published in 1992, he might have had more corporate and less individualistic view of late Medieval Catholicism. As I read his commentary on the liturgical and devotional practices of that era it seemed that Newsom was viewing it through the lens of a post-Vatican II emphasis on the participation of the laity (I don't know if he is a Catholic or not!), finding a dualism that Catholics in the late Medieval era might not have deprecated as he seems to do. Some lay Catholics, as Duffy showed, attended Mass often--Henry VIII himself several times a day--whether or not they received Holy Communion more than once a year. They knew the sacrificial depth of the Mass and wanted to participate in it through attentive and informed attendance, preparing for the great annual events of Lenten penance, sacramental Confession, and reception of Holy Communion. Newsom emphasizes that Henry VIII destroyed all this extra-liturgical devotion during his religious settlement(s) and reformation, but cannot demonstrate that Henry did anything to replace it or was successful in making lay participation any more obvious or reception of Holy Communion any more equal between the laity and the priest--if any equality was achieved through the English Reformation settlements, it was probably by lowering the priest to the level of the laity, not raising the laity, as Newsom seems to perceive it!

I'll look at what Newsom says about the Stuarts, British Colonial America, and the founding of the USA, with an emphasis on religious liberty next week.
Posted by Stephanie A. Mann at 12:00 AM