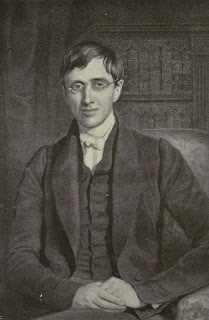 Newman presents us with a seeming contradiction: It is hard to get to Heaven, but it's not that hard to obey God's commandments:

IT must ever be borne in mind, that it is a very great and arduous thing to attain to heaven. "Many are called, few are chosen." "Strait is the gate, and narrow is the way." "Many will seek to enter in, and shall not he able." "If any man come to Me, and hate not his father and mother, and wife and children, and brethren and sisters, yea, and his own life also, he cannot be My disciple." [Matt. xxii. 14; vii. 14. Luke xiii. 24; xiv. 26.]

On the other hand, it is evident to any one who reads the New Testament with attention, that Christ and His Apostles speak of a religious life as something easy, pleasant, and comfortable. Thus, in the words I have taken for my text:—"This is the love of God, that we keep His commandments; and His commandments are not grievous." In like manner our Saviour says, "Come unto Me ... and I will give you rest … My yoke is easy, and My burden is light." [Matt. xi. 28-30.] Solomon, also, in the Old Testament, speaks in the same way of true wisdom:—"Her ways are ways of pleasantness, and all her paths are peace. She is a tree of life to them that lay hold upon her: and happy is every one that retaineth her … When thou liest down, thou shalt not be afraid: yea, thou shalt lie down, and thy sleep shall be sweet." [Prov. iii. 17-24.] Again, we read in the prophet Micah: "What doth the Lord require of thee, but to do justly, and to love mercy, and to walk humbly with thy God?" [Micah vi. 8.] as if it were a little and an easy thing so to do.

Now I will attempt to show how it is that these apparently opposite declarations of Christ and His Prophets and Apostles are fulfilled to us. . . . We must understand how [the Gospel] is both severe and indulgent in its commands, and both arduous and easy in its obedience, in order that we may understand it at all. "His commandments are not grievous," says the text. How is this?—I will give one answer out of several which might be given.

Newman has discovered the Catholic both/and!

He admits that if one is "worldly" and wants pleasure, ease and to do one's own will, the idea of obeying God's commandments will seem burdensome. But in a section not included in The Tears of Christ, Newman describes how the maturing child is eased into obeying God's law by developing good habits of conscience:

For consider how gently God leads us on in our early years, and how very gradually He opens upon us the complicated duties of life. A child at first has hardly any thing to do but to obey his parents; of God he knows just as much as they are able to tell him, and he is not equal to many thoughts either about Him or about the world. He is almost passive in their hands who gave him life; and, though he has those latent instincts about good and evil, truth and falsehood, which all men have, he does not know enough, he has not had experience enough from the contact of external objects, to elicit into form and action those innate principles of conscience, or to make himself conscious of the existence of them.

And while on the one hand his range of duty is very confined, observe how he is assisted in performing it. First, he has no bad habits to hinder the suggestions of his conscience: indolence, pride, ill-temper, do not then act as they afterwards act, when the mind has accustomed itself to disobedience, as stubborn, deep-seated impediments in the way of duty. To obey requires an effort, of course; but an effort like the bodily effort of the child's rising from the ground, when he has fallen on it; not the effort of shaking off drowsy sleep; not the effort (far less) of violent bodily exertion in a time of sickness and long weakness: and the first effort made, obedience on a second trial will be easier than before, till at length it will be easier to obey than not to obey. A good habit will be formed, where otherwise a bad habit would have been formed.

Newman says this growth in holiness leads us to be "trained to love what God and our conscience approve" and these good habits make it easier to follow God's will.

It will be hard to obey God's commandments if we have not been raised in this way that God intended:

Now, if men will not take their duties in Christ's order, but are determined to delay obedience, with the intention of setting about their duty some day or other, and then making up for past time, is it wonderful that they find it grievous and difficult to perform? that they are overwhelmed with the arrears of their great work, that they are entangled and stumble amid the intricacies of the Divine system which has progressively enlarged upon them?

Nevertheless, Newman says that we don't have to do this alone; Baptism makes a Christian:

a child of grace, as Christ's purchased possession, who goes before us with His mercy, puts the blessing first, and then adds the command; regenerates us, and then bids us obey. Christ bids us do nothing that we cannot do. He repairs the fault of our nature, even before it manifests itself in act. He cleanses us from original sin, and rescues us from the wrath of God by the sacrament of baptism. He gives us the gift of His Spirit, and then He says, "What doth the Lord require of thee, but to do justly, and to love mercy, and to walk humbly with thy God?" and is this grievous?

God gives us the grace to be able to obey His Commandments, but as Newman notes, we must persevere, especially after we disobey--and we all know that we have disobeyed:

For, however faithfully we have obeyed God, and however early we began to do so, surely we might have begun sooner than we did, and might have served Him more heartily. We cannot but be conscious of this. Individuals among us may be more or less guilty, as the case may be; but the best and worst among us here assembled, may well unite themselves together so far as this, to confess they have "erred and strayed from God's ways like lost sheep," "have followed too much the devices and desires of their own hearts," have "no health" in themselves as being "miserable offenders."

After this rather dispassionate effort to reconcile these two statements, Newman concludes his sermon by addressing the challenge we face in obeying God's commandments after we've failed in some way. Stay tuned on Monday for that conclusion.
Posted by Stephanie A. Mann at 12:00 AM